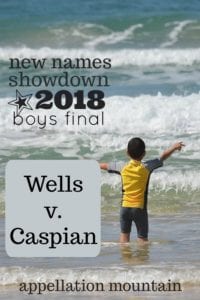 We started this contest with eight names: Caspian, Wells, Koa, Reign, Ledger, Simeon, Gianluca, and Alaric. All of them either recently returned to the US Top 1000, or debuted for the very first time. Every one of the names has potential to rise rapidly in the coming years.

Last week’s results in the SemiFinals shook out like this:

Which of these names will join Wilder and Shepherd in the New Names Showdown victory circle? That depends on you!

A gentle reminder: you’re not necessarily voting for the name you’d choose for a son. (Though if you vote that way, it works!) This contest is about finding the name most likely to rocket up the popularity charts in the coming years.

Both names carry a subtle connection to water. Wells, of course, brings to mind a well or a spring. Caspian, on the other hand, makes us imagine the sprawling inland lake.

The polls will remain open until Thursday, July 26th. Check back on Saturday, July 28th to see which name wins it all!

Don’t forget to vote in the girls’ contest, too.