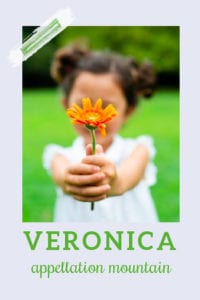 More than 300 years BC, Egyptian royals answered to Berenike or Pherenike, derived from pherein – to bring – and nike – which meant victory millennia before it meant sneaker.

At least five queens reigned under some variation of the name, and other notables were found in the early Christian era.

But there’s another form of the name that seems quite current.

That brings us to the saint. As Jesus struggled under the weight of his cross, a pious woman lent him her scarf. He wiped the sweat from his brow and returned the fabric – miraculously imprinting his image in the process.

Or so goes the legend of Veronica’s veil.

It’s not recorded in the Bible, but the woman may have been real. And her name may have been Berenice. We do know that vera icon means true image in Latin. So time altered Berenice to more closely resemble the phrase, and the regal, powerful name took on a deeply spiritual meaning.

Over the centuries, a wide range of women have answered to the name, including:

The end of the 80s brought a pop culture flood.

And then Winona Ryder starred in Heathers, a dark comedy about high school mean girls. Ryder played the only non-Heather in the clique of super popular girls.

Archie comics gave us Veronica Lodge in 1942. She’s something of a poor little rich girl, sometimes arrogant and snobbish. Now that the long-running series is succeeding as The CW series Riverdale, the character name is back in the spotlight. Camila Mendes plays the part. The series debuted in 2017; a fourth series is expected in early 2021.

Back in 2004, the world met Kristen Bell’s character, a high school student and private investigator. Mars is the daughter of a local PI in Neptune, California. She follows in dad’s footsteps, and stumbles into crimes and mysteries on her own, too.

The show became a fan favorite over three seasons, and now, a dozen years after the final season of the television series and five years after the feature-length film, a fourth season arrived on Hulu.

The baby name Veronica has long ranked in the US Top 1000, reaching the Top 100 in the 1980s and 90s. And yet, somehow, the name feels less connected to the era than chart-toppers like Jessica or Brittany – even though they could be sisters.

Given our love for V names, versatile Veronica could make a timeless choice for a daughter. It falls halfway between an enduring classic like Katherine and current favorites like Olivia.

What do you think of the baby name Veronica? Does it strike you as fresh, timeless, dated?