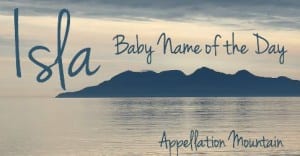 This post was originally published on August 19, 2008. It was substantially revised and re-posted on August 31, 2015.

When this post first ran in 2008, I wrote that this name “seems poised to be the Next Big Thing.” Seven years later, that’s come true.

Thanks to Kayt for suggesting our Baby Name of the Day: Isla.

If your first exposure to Isla was Spanish 101, or maybe Madonna’s 1987 single “La Isla Bonita,” you may have assumed the name was pronounced EES lah.

That’s accurate en español, but the name that’s rising fast today has a silent ‘s’ – EYE lah. It’s Scottish, from the island of Islay, part of the Hebrides and known for its traditional whisky distilleries.

The Scottish place name probably has nothing to do with geography.

The name was recorded as Il, Yla, Ila, Ilea, and Ile – the Gaelic spelling – over the centuries. There are lots of stories about how the island got its name, some including a princess.

I couldn’t find any single explanation that seemed credible. So while it’s quite romantic to imagine that a wandering Danish princess called Yla lent her name to the island, it’s probably not so. 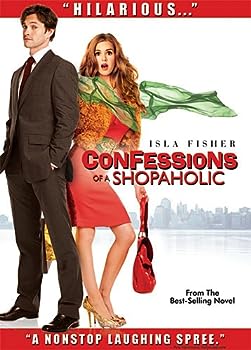 Isla Fisher was born in Australia to Scottish parents. She graduated from Australian television to American movies. 2005’s comedy Wedding Crashers was her big break.

Fisher played Sophie Kinsella’s beloved Becky Bloomwood in the big screen version of Confessions of a Shopaholic. She was Henley in Now You See Me and Myrtle in The Great Gatsby.

In the US, the name’s rise is closely tied to Ms. Fisher’s success.

But in the UK, especially in Scotland, the popularity of Isla predates the actress, and she’s not the first notable bearer of the name. British actress Isla Blair’s career started in the 1960s. Singer Isla St. Clair – born Isabella – recorded her first album of traditional Scottish folk songs in 1971, and later became a successful television host. Isla is a solid Top Ten choice in the UK in 2014.

In fact, Queen Elizabeth II has a great-granddaughter named Isla – the daughter of Peter Phillips, son of Princess Anne. She’s currently 15th in the line of succession.

Isla: On the Rise

Isla had dipped a toe in the US Top 1000 a few times in the late nineteenth and early twentieth centuries, but it was pretty obscure until recently.

The very similar Ayla had fared better, entering the US Top 1000 in 1987 and peaking at #250 in 2012. The name currently ranks #277. Ayla could be  Turkish name referring to the moon, a Hebrew name meaning oak tree, or a borrowing from Jean M. Auel’s 1980 bestseller Clan of the Cave Bear. Darryl Hannah played Ayla in the 1986 movie adaptation, so it looks like that’s what inspired parents.

Isla could be a great substitute for parents looking for something short, sweet, complete and not in the Top Ten – yet.

Do you think Isla is headed for the US Top 100? Top Ten? Readers in Australia and the UK, is Isla everywhere?