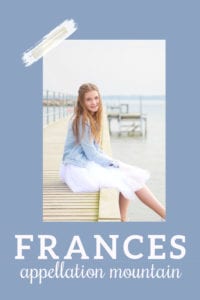 The baby name Frances feels like a charming antique with a lady-like, refined vibe.

One famous Frances comes to mind: the badger of Russell and Lillian Hoban’s series of children’s books. She’s strong-willed and imaginative, and her family is close-knit and loving. The stories have been favorites since they were first published in the 1960s. (Bread and Jam for Frances is one of the titles.)

Fun fact: in the first draft of the stories, Frances was a vole.

The Jim Henson Company adapted the books for a PBS Kids series in 2008, but it ran for only a few episodes.

Still, Frances – and her baby sister Gloria – remain storybook staples for many children.

But ages before the little badger appeared on bookshelves, this name belonged to a saint – one of the most renowned of the Middle Ages.

Born Giovanni, his merchant father was traveling in France during his birth. Accordingly, the nickname Francesco – meaning Frankish or Frenchman – stuck.

It seems he wasn’t the very first Francis. The future saint was born in 1181; while the name doesn’t appear throughout Europe until the 1300s or so, a few appear prior to Francis’ birth.

No question, though, that Giovanni-turned-Francesco gets credit for the popularity of Francis. He renounced his family’s wealth, devoted himself to the poor, and founded a religious order at Assisi that continues more than eight centuries later.

The baby name Frances tends to be the feminine form in English. But standardized spellings are relatively novel. It’s not until the sixteenth century that Frances regularly appears in use in England.

International forms of the name abound. There’s the Spanish Francisca, identical to the Late Latin form of the name. The Italian Francesca enjoyed some popularity in the 1980s, and again early in the 2000s, but it never quite caught on.

When the Hobans named their badger, quite a few young girls might have had the name.

And yet, the name fell steadily beginning in the middle of the twentieth century. By 2007, it hit a low of #828.

Let’s start with the British aristocracy. No shortage of woman answered to the classic name, including Frances Newton, Baroness Cobham, known as one of Queen Elizabeth I’s closest friends. There’s also Frances Stewart, Duchess of Richmond, one of the Restoration era’s most noted beauties. She served as the model for Britannia in the 1600s; her image appeared on British coinage into the 1970s.

Lady Diana Frances Spencer became an international celebrity when she married Prince Charles in 1981. The former Princess of Wales remains beloved, more than twenty years after her tragic death.

Frances Perkins served as Secretary of Labor from 1933 to 1945, the first woman to hold a US Cabinet position and a key part of Roosevelt’s New Deal policies.

They continue over the ages. Author Frances Hodgson Burnett penned classics like The Secret Garden early in the 1900s. A century later, Frances McDormand became a celebrated actor in movies like 1996’s Fargo and 2017’s Three Billboards Outside Ebbing, Missouri.

The baby name Frances comes with a complement of sparky nicknames. There’s boyish Frankie and retro Franny, probably the two most commonly heard. Francie, too, works.

Former favorite Fanny, however, is probably best left in the past.

There’s also another Frances you might overlook: Frances Houseman, better known as Baby in the 1987 coming-of-age movie Dirty Dancing.

Celebrities have embraced Frances for ages. Kurt Cobain and Courtney Love’s daughter Frances Bean is all grown up. Amanda Peet and Brooke Shields have daughters by the name.

In 2014, Jimmy Fallon named his second daughter Frances Cole. They call her Franny. She’s been in the spotlight on his late night talk show many times since.

As of 2018, the baby name Frances reached #445. That’s still a ways from the name’s former Top Ten status. But it signals that the revival of Frances is well underway.

If you’re crushed that Eleanor and Charlotte are such chart-toppers, the equally classic Frances might be a logical substitute.

What do you think of the baby name Frances? Do you prefer Frances or Francesca?

First published on September 2, 2008, this post was revised substantially and re-published on August 6, 2020.