Clio belongs to a muse and a queen, and while the name is short and simple, there’s nothing flimsy about this one. 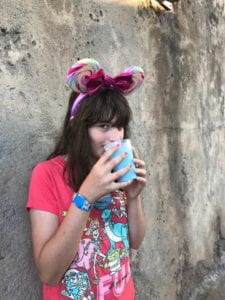 Today’s Baby Name of the Day goes out to my daughter on her eleventh birthday.

In Greek, kleos means glory. The original bearer of the name wasn’t earning renown as much as she was telling of others’ feats, as the muse of history and historic poetry. Legend has it that she also introduced the alphabet to Greece. (Fraternities everywhere can thank her.)

There were nine muses in all, the daughters of Zeus and Mnemosyne. While Thalia and Calliope sound reasonable by today’s standards, Erato, Euterpe, Melpomene, Polyhymnia, Terpsichore and Urania might be more of a stretch. In illustrations of the nine, Clio is the one holding a parchment or scrolls.

The original Greek spelling would’ve been closer to Kleio, so both Cleo and Clio are derived from the same source, and are equally valid spellings. Cleo brings to mind Cleopatra, the powerful, alluring, and ill-fated Egyptian queen. She was the seventh ruler to bear the name.  Adding patra transforms the meaning to something closer to father’s glory. Others argue that Cleopatra is a distinct choice related to khleis, or key, and meaning “key to the fatherland.”

Silent film star Cleo Madison was born Lulu Bailey in 1883. But she could’ve been born Cleo. The name ranked in the US Top 500, rising into the Top 200 around the turn of the twentieth century.

During the 1950s, it left the US Top 1000 and has been absent from the rankings ever since.

Fun fact: Cleo can be short for Cleopatra … or Cleon or Cleopas, so it’s a unisex name.

Clio-with-an-i tends to be more consistently used for women.

Back in 1947, Rita Hayworth played the muse Terpsichore, who adopted the name Kitty Pendleton and attempted to help a Broadway producer in the movie Down to Earth. That title was taken from Samuel Taylor Coleridge’s poem Kubla Khan.

In 1980, the modern adaptation of that old movie became – wait for it – Xanadu. That’s right. Olivia Newton John roller skated and sang her heart out as the muse Clio in the 1980 cult classic. Except on Earth, Clio the Muse became Kira.

We all recognize Cleopatra, whether it’s the sultry Elizabeth Taylor 1963 movie version, or Shakespeare’s enduring Antony and Cleopatra.

In more recent years, Cleo has taken on a pop culture vibe, veering between kitschy and quirky. It’s the name of the goldfish in Pinocchio. In the 1990s, television viewers were encouraged to call Miss Cleo on the Psychic Hotline. And 1998’s catchy single “Cleopatra’s Theme” still gets stuck in my head. Cleopatra, comin’ atcha …

More recently, it’s the name of the Mummy’s daughter, Cleo de Nile, one of the original ghouls enrolled at Monster High.

In nearly every case, I’m repeating Cleo-with-an-e. And that’s the spelling on the rise. Friends alum David Schwimmer gave the name to a daughter in 2011. Characters in Sofia the First, H2O: Just Add Water, and other uses have raised the name’s profile. As of 2018, the name sat just outside of the current Top 1000.

Clio with an i, though? A mere 23 girls received the name in 2018, which makes it quite rare, indeed.

Writer Jane Roper has a daughter by the name, and her blog is one place I regularly see the name spelled with an i.

Outside of my own house, of course. Because the lollipop-mouse-ear-wearing, blue-milk-drinking girl in the picture above is my Clio.

If there’s one headache for this name – no matter how you spell it – it is the similarity to Chloe. Reverse the vowel sounds, and it’s the same name. And given how very popular Chloe has been over the last few decades, and it’s no surprise this name is regularly misheard.

And yet, I don’t think that diminishes the name’s appeal. It’s bright and strong, an ends-in-o name deeply rooted in history, but very much at home today. 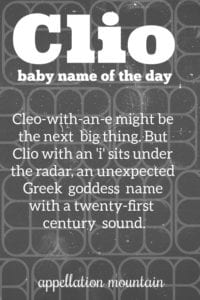