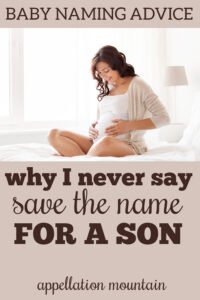 Should you save the name for a son?

It comes up from time to time in #namehelp posts, and in all sorts of baby naming forums, too:

We love the name Raymond, after my dad, but we’re having a girl.

I’d like to use my mother’s maiden name for my first child, but does Macallister work for a daughter?

Often well meaning comments suggest that the family save the name for a son, and choose a different name for their daughter. When I first started out, I think it’s possible that I said that sometimes, too. (And I’m sure I thought it more than once.)

It can seem like a logical suggestion, and I believe the comments are well-meaning. But the longer I write about names, the more those comments make me feel uneasy.

So I thought I’d share why I no longer suggest parents the save name for a son.

I know a few families where the boys are named after fathers and grandfathers, and the girls’ names? They’re just pretty.

The pressure to hand down a family name can be intense. If you’ve fulfilled your obligation with your first child’s name, it’s perfectly understandable that you might want to start with a blank slate for future children.

Factor in that men’s names tend to be slightly less trend-sensitive, and it’s easy to see how you end up with William James III and Everly Grace. One enduring classic to honor generations past, and one on-trend, stylish choice that is all yours.

But I think there’s something very egalitarian about the idea that the firstborn gets the family name, even if William ends up with a granddaughter Willa, or you pass on the family surname Hunter regardless of gender.

Should you name your baby girl Raymond? No. I don’t think you should.

But Rachel, Rae, Raya, and many other names that share the sound are all possibilities.

If you’ve decided that you’d like to honor a loved one, there will always be some way to make that name work.

The impulse to honor a loved one might be specific to this pregnancy.

Maybe your grandfather passed away shortly before you learned you were expecting. Or maybe this is your first child, and your dad’s memory has been much on your mind.

Sometimes it just feels like the right moment to choose an honor name.

Maybe the family plans on just one child.

I know plenty of families who are only planning on one child. They married late in life. There are health concerns. Or financial constraints. Or … well, reasons. If the family has made the decision – or had the decision made for them – then saving a name for a future child isn’t an option.

Sure, I know families who planned on just one child, and later had more. But if there’s a good chance this baby is going to be a singleton, then why forgo using a meaningful name?

What if there’s never a son?

Let’s say that you’ve had The Perfect Boy Name for over a decade. It’s a name that means so much to you and your partner. And in that decade, you’ve welcomed three wonderful daughters. Now you’re 41, and expecting baby #4.

And baby #4 is another girl. Should you really just give up the name? Or should you find a way to incorporate it into her name – as a middle, by finding a feminine form, or just using it for a girl as-is?

Some families let the name go, while others end up with a Ryanne or a Riley Marie.

Here’s what strikes me about this one – if it’s okay to finally use Riley after three other daughters, doesn’t that meant that you could have used it in the first place?

The word I say more often than any on this site is congratulations, and that’s such a privilege and a joy.

But I hear other kinds of stories, too. Heartbreaking tales of miscarriage. Multiple rounds of IVF. Failed adoptions. Building a family isn’t easy, and sometimes the history behind a new addition – if the parents really cared to take us into their confidence – is complicated and intense.

And so even when the parents say, “We’d love to have four more children,” I tend to think that we should use our favorite names now, when the circumstances feel right – even if it isn’t exactly what others might expect.

Of course, you shouldn’t necessarily save names for daughters, either!

When we were first married, I assumed we’d have at least three children, maybe more. (I once suggested seven …) But that wasn’t in the cards. We named our first son after his side of the family, and agreed that our first daughter would be named after my mom, Clare. And our second child was a daughter, so everything worked out.

But if baby #2 had been a son? I think that using Clare as a middle would have been better than not using the name at all.

Did you “save the name for a son” – or a daughter?