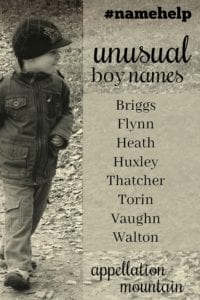 My husband and I are looking for a name for a boy, estimated to arrive in the fall. We had a girl name all set, but are having a much harder time with boys’ names, as seems so often to be the case!

We are definitely looking for something less common, maybe in the lower half of the top 1000.

Names we like: Rex, Gideon, Atlas (seems like it wouldn’t be great for an adult man), and Wyatt (too common for us). We also like Huck as a nickname, but would want the baby to have a more formal name and don’t super love Henry (also so common right now!) or Hugo.

I love Zeke (just Zeke) but my husband is only into it if we use Ezekiel, which I don’t really dig. I really like masculine/western/hellraiser-y names like West, Wilder, Wade, Forrest, etc, but he doesn’t like any of those. We like Irish names quite a bit, but no Irish or Gaelic boys names have stood out to us much, although I love Eamon (he doesn’t).

My husband likes Rhett and Knox, but both of those don’t seem quite right. He also likes Biblical names like Josiah and Levi.

Middle name will likely be Valentine and the last name is a Mc name.

Any suggestions you can give us are much appreciated!

Or maybe it doesn’t matter at all, because so far? You’re not agreeing on any of these.

Let’s look at names that rank at #400 or higher, but still feel current. Since he shot down Wilder but likes Knox, and you’re willing to consider Gideon but not Ezekiel, I suspect style isn’t exactly the challenge. It’s about finding a name that speaks to you both.

Briggs – One thing that strikes me: your list ranges from the super short (Rex) to the longer (Gideon, Ezekiel). I wonder if you might like a name like Briggs? It’s short, but still has an awful lot of sound. I might have suggested Brooks, but it’s hovering near the Top 200. Briggs has the same rugged sensibility, but is less common. It ranked #615 as of 2017.

Flynn – There are certain names that just sound like action hero names. Jack is a go-to, whether we’re talking about Jack Bauer, Jack Reacher, or Jack Sparrow. I think Flynn belongs in this camp. At #756, it remains far less common than Jack (or Finn!) but carries the same spirit.

Heath – Heath caught on in the mid-1960s, thanks to a wildly successful television Western called The Big Valley. (No, really. It launched the careers of Linda Evans and Lee Majors.) It peaked in the 1970s, around the same time Heather made the girls’ Top Ten. And yet, Heath was never anywhere near that popular – the highest it reached was around #180ish. Today, it’s a relatively unknown #885. This makes me think that Heath could wear well today. Everyone knows it, but nobody is using it! It reminds me of Rex and Zeke – short name, big sound.

Huxley – I’m wondering if this is exactly the name you’re looking for? Huxley seems like a natural to shorten to Huck, maybe even more than Henry or Hugo. (Though those work, too.) At #790, it’s pretty unusual. But it sounds like a strong, modern name for a son.

Thatcher – If Wilder is a little too – well – wild, might Thatcher work? It shares the same general style, but feels a little bit more gentle. Thatcher ranked #847 last year. Some fret that it’s too tied up with Margaret Thatcher, but I know plenty of Reagans who weren’t named after the 40th President, so I think Thatcher should be fair game.

Torin – Torin doesn’t quite sound like what it is – an Irish name. Instead, it feels a little bit nouveau and invented, a sort of Soren-Corin spin-off. But it’s handsome, with a great meaning – chief. And it doesn’t even crack the current US Top 1000, so that satisfies your concerns about popularity.

Vaughn – At a mere #962, Vaughn barely makes the current Top 1000. But it’s frequently heard as a surname, which makes it a little easier to spell.

Walton – Like Thatcher, Walton represents a gentler alternative to Wilder. It sounds right at home in the great outdoors, but I can imagine Walton as a poet or scientist, too. Despite seeming like the name ought to be fairly common, Walton hasn’t appeared in the US Top 1000 for well over fifty years.

Overall, my top suggestion is Huxley. It seems like a logical formal name for Huck, plus it reminds me of many of the names on your list. If not, Huxley, I’m wondering if Torin might be the right choice? It’s a style cousin to many of the names you’re considering, but with a little of Eamon’s Gaelic charm, too.

Readers, what would you suggest to Carrie for her son?