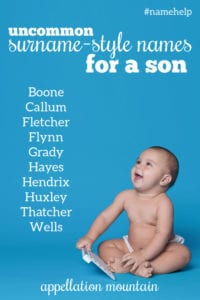 I came across your site while researching baby names and I love your insight into different names, their histories, and how to choose! We are having our first baby soon, a son, and are having trouble deciding on a name.

Nolan and Everett were early favorites, but we’ve decided they are probably too popular and of-the-moment for us.

We love the idea of a name that comes from one of our families, with Perry and Rhoads as the top options, but aren’t in love with either name.

We’re also attracted to a number of last names as first names like Burke, Taggart, and Locke, but are worried that these may be too unusual without a family connection to ground them.

Any advice you have on choosing a direction would be so appreciated!

Congratulations on your first – such an exciting time!

Two things leap out at me:

Still, I wonder if there’s a happy middle: surname names less common than the current Top 100, but not completely unknown. For reference, Everett sits just outside the current US Top 100, while Nolan entered the Top 100 back in 2011.

So let’s look at, say, the Top 250 up to around the number 1000, and see what leaps out? But while we’re looking for names that hit that not-too-common, not-too-rare spot, I’d like to suggest one more approach.

It’s possible that you might find a name rich with personal meaning that isn’t a family name. Surnames of favorite authors, musicians, artists, and the like all work here. Significant place names might work here, too. (I’ve heard of families who named a child for a childhood hometown, or even the street where one parent grew up.)

One last note: since the surname is three syllables and ends with -son, names like Harrison and Emerson are ruled out.

So, mid-way between Nolan and Taggart, would you consider:

Boone – Boone has a big sound. It feels nicely Americana, thanks to frontiersman Daniel Boone. But it actually means good, as in the French bon and Latin bonus.

Callum – It’s not a surname, but it is Irish – just like Nolan.

Fletcher – I noticed that you haven’t considered many of the ends-with-r surname names. Maybe that’s because some, like Carter and Hunter, are already chart-toppers. But Fletcher might be just different enough to satisfy.

Flynn – I love the brisk, upbeat sound of Flynn. It’s a short surname that works well as a first.

Grady – Brady is very football, and had a good run in recent years. But we’ve mostly overlooked Grady, even though it shares the Gray sound of favorites like Grayson.

Hayes – Hayes is fast-rising, but it remains far less common than Everett and Nolan. Your kiddo would probably make it to kindergarten – at least – before he met other boys with his name. It’s got a great, edgy sound that’s both straightforward and a little bit surprising, all at once.

Hendrix – Maybe Hendrix is rising because people love rock star surnames, like Lennon and Presley. Or maybe it’s because of the X factor. Either way, Hendrix is one of those names that feels exciting, but not outlandish, when you hear it on a kid.

Huxley – Another spin on the H-with-an-x category: Huxley. I think possible nickname Huck is a bonus.

Wells – Is ‘s’ the new ‘n’? Lately, lots of stylish boy names end with this sound. Hayes is mentioned above, and Wells seems like another candidate for a known, but not too out-there, option.

Overall, my favorites for you are Hayes and Boone. I think they set the needle right in the middle, between the oh-another-one names like Nolan (great name though it is!) and the can-you-repeat-that-please rarities like Burke.

I know the community will have some great suggestions, too. Readers, what would you suggest to Ainsley, for a (probably) surname-style name that’s unusual, but maybe not too different?