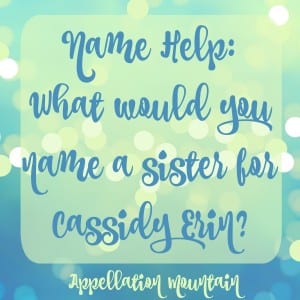 My husband and I had very little trouble naming our first daughter. He is of Irish descent, and we fell in love with the name Cassidy while looking at a list of Irish girls’ names.

Because our last name is one syllable, and Cassidy is three syllables, I was next looking for a two syllable middle name. My husband suggested Erin, and the baby’s name was settled!

Four our second daughter, the naming process has not gone anywhere near as smoothly. My husband and I have looked extensively online and in a baby book for that perfect name, but have very few ideas. The ideas that we come up with don’t really sound right, and we just can’t really settle on anything.

I admittedly have all kinds of rules, some of which I have begun to stray from, since I was coming up empty handed.

Please read on for my response, and leave your thoughtful ideas and suggestions in the comments!

That’s quite a list! But it’s not an unreasonable one. Well, it might be worth re-considering the three-two syllable pattern. (But you’ve mentioned that you’re open to that.)

I was struggling with suggestions at first, and it struck me that it’s probably because Cassidy doesn’t immediately read Irish to me. It’s a surname name, and maybe a cowgirl name (Hopalong!), and not so long ago it was a major celebrity kid name (Kathie Lee’s daughter, much-mentioned on morning television – though she’s now grown up.) Then again, you didn’t ask for Irish names.

So let’s start with surname names. We can probably rule out Riley, since it ranked #47 in 2014, before Inside Out was such a success, with a young girl named Riley at the heart of the story. Kennedy also seems likely to be out, since it ranked #54 in 2014 – though it is undeniably Irish, and the alliteration of Cassidy and Kennedy could be appealing.

Moving on … Would you consider:

If you’re after another Irish-signifiying middle, there’s Ireland, Clover, or Emerald – though they’re all a bit more daring than Erin.

For a two-syllable middle that’s not quite as out-there, how about Adele, Elise, Iris, or Eden? If you’d prefer to avoid a vowel – and lessen the chances of spelling something! – there’s Ciel (from the French word for sky, and also heaven), Laurel (though maybe too much nature name with Juniper), Celeste, and Delphine. Or maybe something too popular for you to consider as a given name, like Riley or Kennedy, depending on the first name?

I have a few favorite combinations for you:

So overall, I’m rooting for Juniper Riley, but I know that our readers will have fantastic suggestions that I’ve never thought of!

Readers, what would you name a sister for Cassidy Erin?