AmyA is expecting baby #2 in February 2015.  She and her husband have a son named Tate.  She writes:

We loved the name Tate for a boy for years and had no other boy options. We did not find out the gender for him and if he would have been a girl we would have named him Juliette.

Now, 2.5 years later, we are really having trouble with a boy and a girl name (gender is going to be a surprise).

I loved Tate because it was not popular and easy to spell- those were my main requirements.

I feel like Juliette has risen in the ranks and it turns me off a bit.

Right now, for girls we like Jules and Liv and for boys we have nothing!

I also love Clementine, but cannot convince my husband.

My maiden name was Anderson so I thought Anders for a boy could be cute and different, but we aren’t in love with it. We are stuck – we like a few but haven’t stumbled upon anything we LOVE.

Please help! I want to be able to have the name picked out a few months before to make sure it sticks.

Read on for my answer – and please leave your thoughts in the comments!

This happens so often.  The first child’s name is The Name – discussed for years, sometimes agreed upon since before the happy couple said “I do.”  And then the second child comes along and … nothing quite lives up to The Name.

My husband and I were in this camp.  We had The Name for a girl and The Name for a boy.  We have a son and a daughter, so we used both.  But I felt a moment of true panic before we found out baby #2 was a girl.  Because no boy name could match our son’s name.

Or so it seemed.

I think the trouble is this: in the beginning, the lead time to choose your first child’s name can easily be a year or more.  You mull over options in a happy maybe-someday haze.  And when you find a great name, there’s plenty of time to really get used to it, to elevate it from a very good name to The Name.

With baby number two?  Things are a little bit more hectic, and that timeline is compressed!  So there’s less time to fall for another name.

But that doesn’t mean it can’t happen.  Let’s take a look at siblings for Tate: first the general requirements, then brother names, and finally sister possibilities.

A Sibling for Tate: The Basics

Let’s assume you want the same basic qualities that you’ve found in Tate in a boy’s name:

How popular is too popular?  Tate currently ranks #358.  The name is climbing, but still feels nicely uncommon.  Juliette charted at #294 in 2013, plus Juliet stood at #238.  And you’ve said that the name no longer feels quite right to you.  So let’s assume that we’re looking for something around the 300 mark and up.

For a girl, it seems like you’re looking for:

A Sibling for Tate: Brother Names

It’s funny how often a name popped into my head, and then I realized it was really popular.  That’s the beauty of Tate, isn’t it?  Straightforward and instantly recognizable, but not too frequently heard.  I discarded Owen and Parker on the grounds of their Top 100 rankings.

A Sibling for Tate: Sister Names

Hmmm … I think the challenge with girls’ names is that you really can go almost any direction.  I’m tempted to suggest Edie and Juno and Coco – especially Coco! – but I think those aren’t quite the right fit.

And so let’s open it to others – readers, what would you name a sibling for Tate?  Would you keep it short and sweet, or choose something more elaborate? 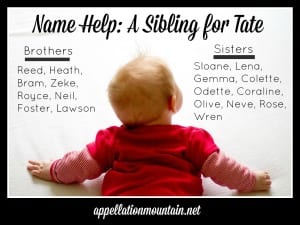