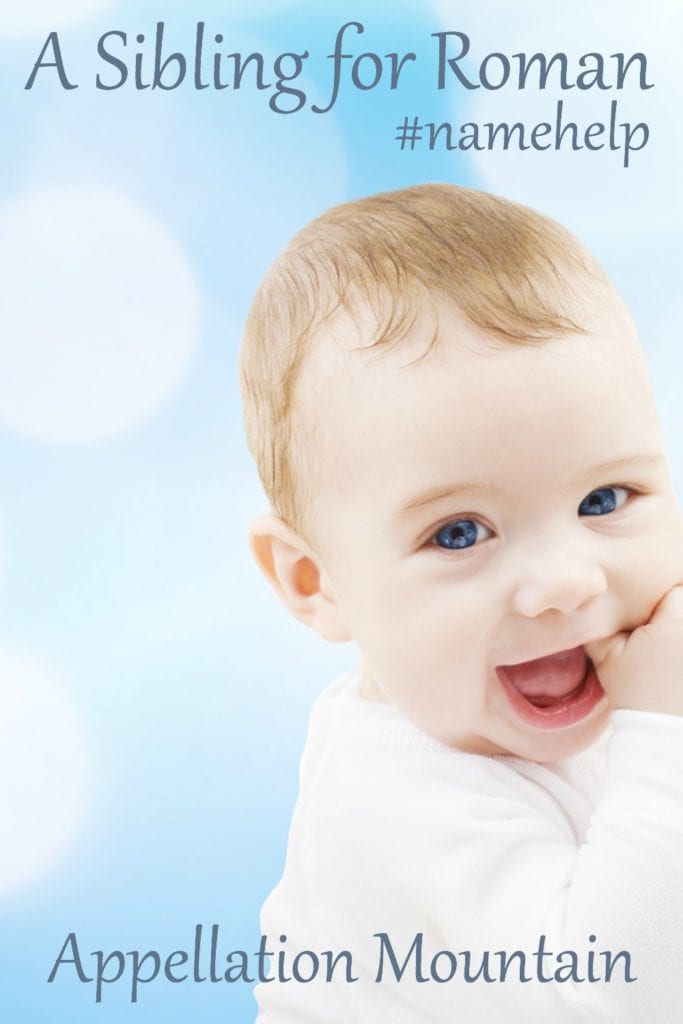 With our first, I was so sure and loved the name Roman Edward. It was short, strong, not popular, but not weird, and didn’t have a nickname. Everyone can say it and spell it. Edward is my father’s name.

We had Stella picked out for a girl the first time around, but this time around I’m not sure I like it. And I don’t like that I see it on trending lists.

I’m all over the place with things I like – with a boy I need another strong name to stand up to Roman. I like Sawyer, but my husband feels that it is not strong. I also like O names, Oscar, Otis, Orsen. I like the name Monte, but a friend of mine with a Roman named her second son Monte. I also like Hudson, Beau, Phoenix, Merrick, Lennon, and Theo.

With a girl, I think Sage is at the top of my list. Its fits that short, not popular, but not weird, easy to spell, without a nickname. Also on the girls list: Eden, Flora, Ophelia, Philomena, Josie/Josey, Margaret, Theodora, Harriet, Lydia, Demi, Beatrix, Coraline (Cora), Henrietta, Margot, and Estelle (Stella).

Estelle is a family name, along with Margaret, Lorraine, Yvonne, and Antoinette. My father-in-law is Philip which is why Philomena struck me.

Read on for my response, and please leave your helpful suggestions in the comments.

I think you’re experiencing something very common. The shortlist from an earlier pregnancy  often feels completely wrong the next time.

Why is that? In a funny way, I think those names can feel like they belong to your older child. (Even though, obviously, your son’s name isn’t Stella!)

A Sibling for Roman: Girl Names

It seems like there might be a difference between your baby naming style for a son and a daughter. For a boy, it seems like you tend towards shorter, nickname-proof picks. Several of the girls’ names on your list are longer, elaborate, and much more likely to be shortened.

The names from your original list that meet the short, nickname-proof, not too popular/not too weird mark are Sage, Eden, Josie, Demi, Margot, and possibly Estelle. Theodora, Henrietta, and Philomena are, at four syllables each, among the longest names for girls.

I do think you’ve got some great choices here already. Sage Philomena combines both styles, and honors your husband’s side of the family, too.

A Sibling for Roman: Boy Names

Even if your friend doesn’t mind, I think I’d rule out Monte. While I don’t mind sharing a name among friends, it seems really unusual to repeat two names, doesn’t it?

I do think your shortlist for boys is great. Theo, Hudson, Sawyer, and Lennon all immediately came to mind as ideas for Roman’s brother name! Some other thoughts that aren’t on your original list:

Beckett – Farther down the popularity list than Roman, Beckett feels like a strong choice for a son.

Arlo – I think Theo is great, too, but wanted to mention Arlo. Theo isn’t very common, but Theodore is just inside the current US Top 100. Arlo is rising, but remains around the #500 mark.

Everett – Another -ett ending boys’ name, Everett, like Roman, is just outside the current US Top 100. You might go even farther and use Everest, as in the mountain – though it’s pretty rare as a given name in the US.

Declan – A name with Irish roots, Declan isn’t far behind Roman in terms of popularity.

Archer – Roman is interesting, because even though it’s a strong name, it’s not an aggressive one necessarily. I think Archer can be described the same way. The downside? There was such a thing as a Roman archer, which potentially makes your sons’ names a phrase.

My favorite name from your list is Orsen, though I’m most familiar with it spelled Orson. It’s not common either way. It strikes me as a great, unexpected brother name for Roman, and if you’re looking for strength? Well, Orson comes from the Latin ursus – bear.

If not Orson, I think Theo or Arlo are both really appealing choices. It puts the ‘o’ you like at the end of the name rather than the beginning, but I think the sound works well with older brother Roman.

Since Roman has one grandfather’s name, it seems like Philip is the logical middle name for a second son. Arlo Philip, Theo Philip, Orson Philip, Archer Philip – I think it works well with many of the names we’ve discussed.

Readers, what would you suggest to Kayla?