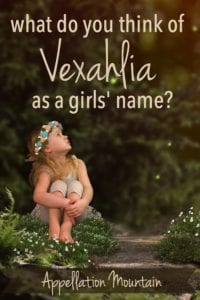 Is Vexahlia an acceptable name for a girl?

I’ve been through most girl names and none of them have struck us like this one. It comes from a character in Dungeons & Dragons. Is the first bit – Vex – too negative? It’s not much different from Noah starting with no, which is a negative term.

Our other daughter is Winry. We shorten it to Win, which is easier for people.

I’d love to hear opinions on Vexahlia, and any name suggestions with a similar sound or feel. I’m a huge fan of unusual, out-there names with a classic nickname.

I’m torn on this one.

Vexahlia sounds like a name. Plenty of girls’ names end with -lia, including popular picks like Amelia and Natalia. And with Harry Potter, Star Wars, Game of Thrones, and Lord of the Rings influencing baby name trends, why not Dungeons & Dragons?

Still, this marks the first time a D&D name has come up here, so I went searching for information on the character.

According to the vast and informative interwebs, Vex’ahlia and her twin brother Vax’ildan were born to a human mother and an elven father. It made for a rough childhood. She’s skilled with a longbow, speaks several languages, and excels as a tracker. Both she and Vax belong to Vox Machina, a group of adventurers.

Given the extensive mythology of D&D, some of this might be wrong – or just plain pointless – but it seems like Vex’ahlia could easily inspire a child’s name, at least in an age that sees Khaleesi rank in the US Top 1000.

To sum up the positives so far: it sounds like a name, the character seems admirable, and sci-fi and fantasy characters have become a rich source of mainstream baby names.

Let’s move on to the negatives, because I’m still struggling to give this one an enthusiastic yes.

First, there’s the problem with meaning. To vex is to worry or to annoy. It reminds me of Bane – great, on-trend sound, but strongly negative meaning. And yet, few of us use vex in everyday speech. And it’s not the name – just a possible short form that might never stick. So it’s less than ideal, but probably not a deal-breaker.

Next, let’s talk about the challenges of a (very) unusual name. When I say challenges, I mean exactly that. They’re not reasons to avoid a name; instead, they’re things to consider.

Here’s the part that gives me pause. I’m imagining what it would be like to tell the story of this specific name in different settings. A rare family name is explained easily. But when it comes to cultural references, things get dicey.

Telling a prospective employer or new romantic partner’s parents that you were named for, say, a literary figure or another borrowing from the arts feels one way. I suspect revealing a pop culture reference might be more awkward. I imagine that Khaleesi could be a successful heart surgeon and still have patients asking her about dragons.

A name drawn from, say, opera or ballet or The Faerie Queen, conveys one message. It implies the parents were educated, sophisticated, successful.

Names taken from pop culture can read the other way.

Except that this isn’t necessarily accurate, and it certainly doesn’t feel fair.

We’ve drawn names from popular culture for ages. It’s just been a little tougher to connect the dots. Nancy does a brilliant job of surfacing these stories. Today, at least some parents seem to shrug off the idea that names like Anakin or Kylo will be problematic. And when enough parents operate on that premise, it becomes true.

This name surpasses rare; it verges on unique. The name has never been given to even five children in a single year. The US Census records list no Vexahlias, either. (Though I did find Vexella, Vicola, and Vicalee.)

Maybe my biggest hesitation is that Vexahlia offers little in the way of easy nicknames, though I suspect that others might get used to Vex pretty quickly.

And yet, when I run this past my list of 12 Warning Signs, Vexahlia passes.

In terms of alternatives, other V names that come to mind are Valencia, Vivica, Evolet, Reverie, Valletta, Vesta, and Varvara. And yet I’m not sure any of those quite hit the right note.

I recommend that if you do choose Vexahlia, you pair it with a more traditional middle name.

Let’s have a poll, and don’t forget to add your suggestions in the comments. If there are any D&D fans out there, I’d love to hear other names from the universe, too.

What do you think of Vexahlia? Do you think the general perception of pop culture baby names is changing? Or was it never really that big a deal?