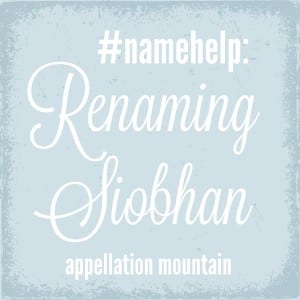 I would love some baby name advice for your Saturday posts! It’s a bit different though as I’m getting the advice for myself.

Currently my name is Siobhan Patrice. I absolutely hate it. Nobody can ever spell it, pronounce it and about 30% of people that see it think I’m a guy! It’s never felt like “my” name, so much so that I don’t even respond to it sometimes. My middle name is just as bad and I’m also hoping to take my husband’s last name, so why not change the whole thing at once!

I’ve found a few names I like: Summer and Scarlett. But they didn’t feel right. I love Noelle but it’s too similar to my daughter’s name so that’s out. I really love Marissa Noelle but I’m having trouble really pulling the trigger on it and hope you can help me either cement that or throw it out.

I don’t want anything too unique (like Siobhan or Nevaeh or something like that), but also not too common (think Ashley, Megan, Jessica). I also want something that will age well.

All in all I’m just really looking for my name. I haven’t spoken to my biological family for years, and the name just holds so much baggage for me. I’m ready to get rid of it and be free from it all.

Thank you so much for taking the time to read this and hopefully you can help!

This is an interesting question, and it’s one that strikes a chord for me personally. I legally changed my name in my late 20s, and took my husband’s surname in the process.

I omitted your surname from the post, but for readers, it’s one syllable, very popular, and starts with S. The good news is that a great many names with work well with this last name!

Let’s start with some basics: I absolutely believe that people should be called what they want to be called. But this isn’t necessarily the majority opinion. I had a horrible experience at my bank while I was mid-name change with a branch manager who implied that name changes were attempts to commit fraud.

It’s also jarring. Even when you know that your legal name isn’t Your Name, it takes a while to get used to answering to a new name. During the first few months, I inadvertently introduced myself by my old name a few times. (I was in my late 20s – it was hard to overcome after so many years!)

Lastly, even though it sounds like you’re not in touch with your family of origin, or many people from your early life, you might find that it complicates other things: all of your high school and college transcripts and medical records include your old name, your daughter’s various records include your current name, etcetera.

Changing your name isn’t instant, and it takes time for all of the documentation to update, and for you and those in your life to make the switch.

So, with all of that said, I have a few thoughts:

Consider legally changing your middle name only, or moving Siobhan into the middle spot. Even thought it doesn’t feel like your name, and it has lots of negatives attached to it, it may be simpler to explain to the galaxy of people you’ll need to inform. “I’ve decided to use my middle name,” is pretty straightforward. “I’ve legally changed my name because I’ve long since broken ties with my family of origin and I wanted a clean start” might be uncomfortable for you to say – especially when it’s someone who doesn’t really need to know anything about you. Some people can brazen it out and declare, “I changed my name,” as if it’s as common as a brunette dying her hair blonde. But it’s not always easy to end the conversation there.

If you’re determined to choose a name that is completely fresh – and that might be the right choice, given your circumstances – think about how you’ll handle the subject when the other mom on the playground greets you as Siobhan. After you’ve already explained it. Twice.

Look for names that could reasonably be your birth name. My birth name was in the Top Ten for the year of my birth. The new name I chose was barely in the Top 500. But it was ranked, and it was plausible that it could have been my given name. If I’d renamed myself Everly or Skylar? I think that would have been uncomfortable. True, some people are looking to rename themselves something really unusual – but I don’t think that’s your goal here. I think that might be part of the reason Scarlett feels a little wrong – it would have been really unusual for a woman born before the mid-1990s.

Look for a name that retains any of the good you do want to remember, or celebrates your independence. Is there any positive from your early life that you do want to embrace? A beloved grandmother or a favorite place? Or maybe names associated with the things that helped you leave your past behind – the first street you lived on when you really left home, or an author or musician whose work you admire, for example. While it’s absolutely fine to choose a name that’s just plain appealing, it’s worth thinking about a name that celebrates what this change means to you – even if it’s a subtle reference that others won’t necessarily recognize.

Now, on to the question of The Name:

Marissa – I think the strength of Marissa is that it absolutely could have been your birth name. (Since I’m not sure about the year of your birth, I’m using 1980 data, which makes it a Top 200 name.) It’s nothing like Siobhan, which is exactly what you were after, right?

Katherine or Elizabeth – Another possibility is to choose a name that’s quite classic. You mentioned wanting a name that will age well. While a million women called Michelle and Jennifer can tell you that their names did age, as will Madison and Avery, there’s something to be said for a more timeless approach. Classic names for girls might be a direction worth exploring.

Julia – But looking at Marissa, I wonder if names like Katherine and Elizabeth are too tailored – a quality I’d say Siobhan shares. You might want to consider names that are classic, but have a more conventionally feminine sound. Julia comes to mind, as do Laura, Diana, and Sabrina. Even Sophia, a chart-topper for girls born in recent years, is perfectly reasonable for a 1980s baby.

Cara – Here’s one that keeps coming back to me. It does sound a little dated in 2016, but only a little. It’s from an Italian word meaning “beloved” – as in the phrase cara mia, my love. I think I’m tempted to suggest it because if you’re going to change your name to celebrate moving on from a difficult past, there’s something to be said for choosing a name with an uplifting meaning. If that’s too short, there’s also Carina.

Jane, Jeanne, or another feminine form of John – Siobhan is an Irish feminine form of John. One possibility might be to choose one of the many other related names, either as a first or a middle. Sian is one of my favorites, but maybe that’s too close to your birth name? Joanna – choose your spelling – is one that might have more of the lyrical, feminine feel of Marissa.

Reese – I don’t think you’ll like the sound of Reese as a given name, but stay with me for a minute. Siobhan Patrice doesn’t offer a lot of options for reinventing your name. If you were born Elizabeth, you could be Betsy or Ella or … well, let’s just say that you wouldn’t have to worry about a legal name change. But if you like the idea of keeping part of your name, how about the Reese sound in Patrice? It wasn’t on anybody’s radar as a baby name in 1980, but it could be a great middle – and a middle that sounds like a maiden name, too. Marissa Reese LN. Sabrina Reese LN. Julia Reese LN.

Summer – Summer is actually a perfectly reasonable name for a woman born in the 1980s, so I think it’s worth keeping on your list. And yet, I don’t think it’s quite the feeling you’re hoping for. I added it here to suggest one more way to tie to your birth name and the name you give yourself: keeping your initials, or at least your first initial. It might be worth focusing on S names. Sarah, Summer, Sabrina, Serena (with the added bonus of a lovely meaning), Selena, Selah, Sarai, Stefania … so many options, and that’s just one letter!

I’m having a hard time wrapping my head around Marissa Noelle, though I don’t think it’s a bad choice at all. It’s just such a clean slate and a complete break from your current name that I wonder what it will be like for you, to have to reintroduce yourself and tell your story. Who knows? Maybe you’re contemplating a move across the country, or something else that would start a new chapter in your life and it’s not a concern.

Or maybe that’s my own story interfering here – because I do still see plenty of people from my childhood, and I am lucky enough to have a great relationship with my mom. (Yup, even after the name change.)

Readers, can you offer some thoughts on a new name for Siobhan? I’m particularly interested to hear from those of you who changed your own names – I know there are a few more of us! Did you completely break with your birth name, or try to keep a connection to it in some way?