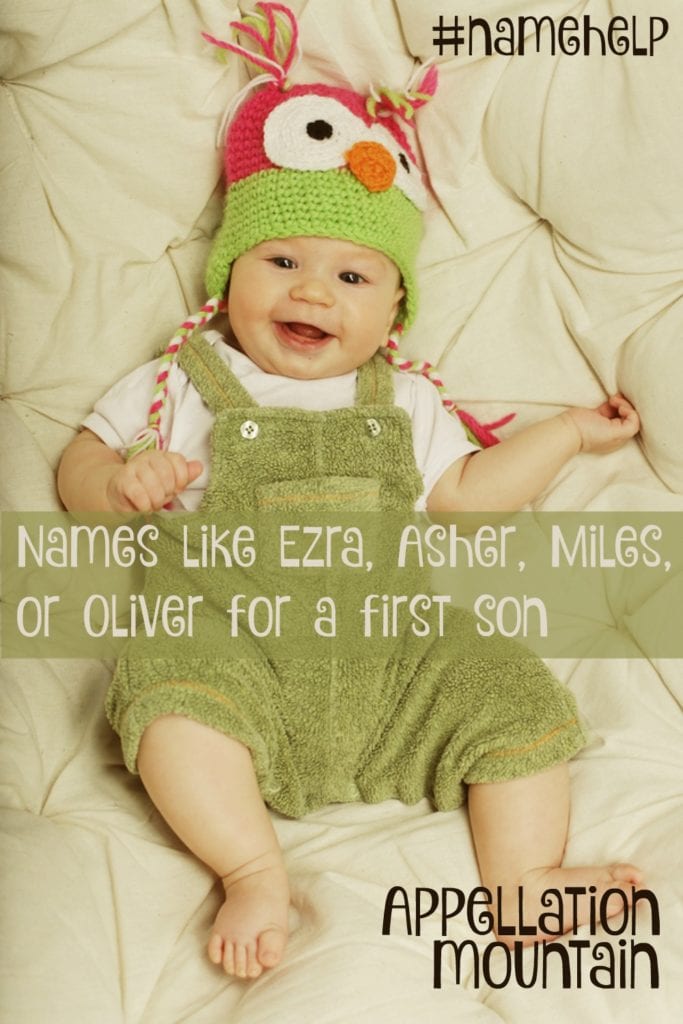 Ever since we found out we were expecting a boy, we thought we had a name: David. David was my husband’s older brother who died in an accident at 19. I never met David, but it seemed so important to my husband that I never questioned it.

At the same time, something about it never felt completely right to me. I tried to warm up to calling him Davey, or maybe even DJ. We didn’t really like any J middle names, but it seemed like maybe we would choose one because I liked the idea of DJ better.

We didn’t tell a lot of people about the name. Looking back, maybe because I didn’t feel like it was right. And then we were talking to my mother-in-law, and my husband told her about the name for the first time. She got quiet, and told us that she was so touched, and loved us for wanting to keep his memory alive, but thought it would be hard to have another baby in her life with David’s name.

All this time, I’ve been thinking that using the name was something we had to do, and it turns out that my husband felt the same. On our drive home, we decided that David would be our son’s middle name. Now we need a first!

The last name will be H@rr!son.

I like Asher, Miles, and Ezra. We have nephews named Oliver and Caleb, both of which I like but can’t use. We both like Charlie, but not Charles. My husband doesn’t like nicknames. (He’s Michael, and doesn’t like being called Mike – but lots of people do …) We agree on Henry, but someone pointed out that Harrison means Henry’s son, so that’s probably out, too.

So here we are, due in just a few weeks, with a middle name chosen, but no first name. Help!

Reading your letter, all I can think is … well, this is a twist! You did the right thing, agreeing to use a name rich with meaning for your husband’s family. But now that’s off the table, and you need to find a solid shortlist as soon as possible.

My first question: is there a reason Asher, Miles, or Ezra can’t be the name? I love the sound of Ezra David H@rr!son. Asher and Miles work, too.

But if those three aren’t exactly right, let’s see if we can put some more options on your list.

Theo – There’s something upbeat about an ‘o’ ending. Theodore feels traditional, and begs to be shortened. But Theo? Theo has all the friendly charm, none of the formality.

Leo – Of course, the problem with Theo is that it might not feel complete. If that’s the case, may I suggest  the vintage, regal Leo instead?

Max – Max is a mini name with style to spare, and Max H@rr!son sounds great together. There’s also Maxwell or Maximus or Maximilian – but that might not sit well with your husband’s Mike/Michael concerns.

Jude – Another name that is complete at just one syllable: Jude, he of the Beatles song and the saint.

Cole – Cole recently left the US Top 100 after well over a decade in the rankings. But it’s still very familiar, and that strong C sound reminds me of Caleb.

Micah – I know you’ve just gotten past the whole naming-for-a-loved-one moment, but I wonder if you would like Micah? It’s not the same as having Michael Jr., but it does nod to dad’s name.

Jonah – If not Micah, maybe Jonah? Bonus: Jonah David could be JD were you so inclined.

Emmett – I really like the sound of Emmett H@rr!son. Emmett has a relaxed, vintage, and yet contemporary sound, too.

As for Henry, I’m torn. It does bother me that your first and last names share the same roots – it feels like naming someone John Johnson. And yet, it doesn’t sound that way. In fact, I like the sound of Henry Harrison. So let’s have a quick poll, because I think the readers will have some good insights here.

Overall, my favorite is Emmett, but that’s only if Ezra is truly off the table.

Readers, what would you suggest to Bree and Michael?