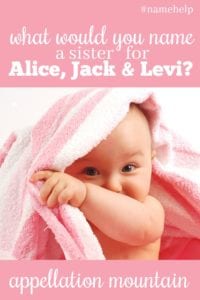 Update: Welcome to the world, Ruby Helen! Kara writes: I liked the idea of Ruth, maybe because it reminds me of Lucy, a name we ruled out because it’s basically part of our last name. At first, I thought Ruby was maybe too modern, but it was my husband’s favorite after reading it on this list. She was going to be Ruby Irene, which we love, but then we realized her initials would’ve been RID, so we made a switch to Ruby Helen at the last minute.

Our fourth baby is due at the end of October, and nothing seems right!

It’s a girl. We already have:

Alice Mary – Middle name is for my husband’s grandmother.

Jack Henry – No real reason for either name, we just loved it.

Levi Michael – My brother, Michael, passed away shortly before Levi was born.

Here are my rules:

Please read on for my response, and leave your thoughtful responses in the comments.

It sounds like you know exactly what you want – but that doesn’t mean the process of finding it will be easy.

Before we go any further, let’s talk about something.

You’ve got a lot of rules!

That can be a good thing, because it creates a very short list.

But it can also be limiting. What happens if you find a name you love, but it conflicts with a rule? I’d almost always suggest you use the name you love anyway.

Or maybe finding that elusive name that meets your criteria AND you kinda-sorta like will be enough? Some families seem to take the latter approach, and I think it can work just fine.

So I’m going to focus on finding names that conform to your rules, but I do think it worth considering if some of your rules were made to be broken – at least for this baby.

Eden – I’d call Alice gently old-fashioned, so I’m not sure if Eden feels like too much of a style switch? It’s a modern favorite, closer to Levi and Jack than Alice, perhaps. But I think it satisfies your criteria and feels different from the rest of the family’s names.

Grace – Nickname-proof Grace hits all the marks. Bonus? It seems like a style-match for every one of your older kids’ names. It’s even close to Kate, but without repeating an initial. One possible downside? Grace has appeared in – or just outside of – the US Top 20 ever since the year 2000. I don’t find it too common, but, of course, that really depends on how many little Graces you know.

Helen – I always think of Helen and Alice as sisters. Theyr’e tailored, but feminine; vintage, but not too antique. While Alice has returned to the US Top 100, Helen remains relatively rare – but no one could ever argue that it’s not a name instantly recognized and easily spelled.

Pearl – Some short names, like Grace and Rose, are nickname-proof, and yet, it’s common to hear them extended to Gracie and Rosie. Pearl, on the other hand, is far more likely to be just Pearl.

Rose – I’ve just mentioned one possible drawback to Rose – hearing your daughter called Rosie – and yet, I think it hits the instantly recognized, but not too popular mark exactly.

Overall, I think I like Grace best with Alice, Jack, and Levi. It seems like a style match that meets every point on your must-have list.

But now I’m wondering: is that enough? Or should you revisit names like Emma and Clara? It all comes down to personal preference, so there’s no right or wrong answer.

Readers, I’d love to know how you handled a surname that ends in ‘a’ – and what other names would you suggest for a sister to Alice, Jack, and Levi?