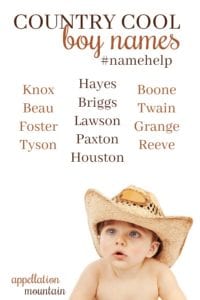 Our newborn son doesn’t have a birth certificate yet, and I feel horrible about it! Name purgatory? Completely understand the term.

My husband and I have a daughter together named Paisley.

I love names that were popular in the 1800s. Classic, country, and unique. I also want it to sound lovely, it will be used in this old house more often than butter …

Beau – Paisley’s favorite, she calls him her little beau

Foster – Foster does seem to suit him, for now while he’s little. I love the meaning.

I love soft names like Noah and Joshua and handsome names like Tristan and Austin. I’m not opposed to using his middle name as his preferred name or using initials to incorporate three names, like JW Foster.

My husband likes strong, assertive names. I’m afraid they feel too harsh. A little more like he’s naming a bull rider than a gentleman cowboy! 😉 Here’s his list:

Kind heartfelt thanks for the rescue!

Congratulations on the birth of your son! Sometimes it just plain takes a little longer to find The Name than we’d like, doesn’t it? You’re definitely not the first parent to look at your baby and come up blank.

The good news? I think you and your husband do have some overlap in your lists. Or, at least, I could swap names from your list and his list with ease. At first I kept getting stuck on this phrase: classic, country, and unique. Because it’s difficult to find a name that feels both unique and classic, right?

So let’s re-frame the way we talk about your ideal name:

From your lists, I’d keep:

Hayes – Since he has Hayden and Raylan on his list, but you have Rawlins and James, would Hayes split the difference? It’s a little on the softer side, but still feels plenty rugged.

Briggs – Again, I’m drawing from Rawlins on your list, but also the sounds your husband seems to favor.

Paxton – Daxton is a recent invention, but Paxton has history galore. The surname name has Old English roots, but many see it today and think of the Latin pax – peace.

Houston – Austin is on your list, but would another place name appeal more to your husband? Houston has a big, bold sound – and a reputation to match! There’s also Dallas, of course.

But I think it’s time to work on combinations, and choosing an actual name that you can both love!

My top suggestion: Tyson Beau, called Beau. One of your husband’s favorites takes the first name spot, but his everyday use name is one that you – and your daughter – love.

Again, I think your lists aren’t so far apart – it’s just tough to close that final gap between your favorites and his! I do think you’d both love Beau, if only because the story around it is so sweet. If your husband is on board with Beau, either as a middle or a first, I’d encourage you to revisit his favorites. Beau Tyson, Beau Daxton, Paxton Beau, Beau Hayden … there’s lots of potential there!

As for James, if having a family name is important, I think your idea of having three names is great: James Beau Paxton, Lawson Briggs James, or Tyson Beau James, maybe? They all work!

Readers, we need your help! What’s the perfect compromise name for their little gentleman cowboy?