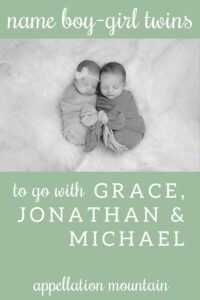 We have three kiddos: Grace “Gracie” Elizabeth, Jonathan “Jon” Andrew, and Michael Stephen – who we thought we’d call Mickey, but is usually Michael. We thought we were expecting our fourth (and probably last) baby. But surprise! We’re having boy-girl twins.

The problem is that we really only have one name picked out: Lucy has been the girl name I wanted for either Jon or Michael. We agreed that if this baby was a boy, he’d be Lucas or Luke. (And probably called Luke either way.) I didn’t want to use Luke before if we might still have a Lucy.

Now we’re not sure if we should use Lucy or Luke, but we know we can’t use both!

Our last name is Czech. It starts with a Hr, ends with a ka and usually makes people stop before they say it. So we want our children’s names to be simple and classic.

We’ve also talked about Marie, Emma, Julia, James, David, and Paul, but none of them seem right. I think I’d rather not repeat an initial, so that means no more G, J, or M names. (Maybe why I’m lukewarm on Marie/James, etc., because I love those names for other people.)

Middle names are also names we love, usually ones we considered for first names but weren’t quite right.

So … which baby gets the one name? And what do we name his/her sibling?

Congratulations on your new daughter and son!

I totally get how this could throw you for a loop. You have The Name all set. But there’s no way to share it!

My first impulse – and still my advice – is to name your daughter Lucy. It sounds like you like the name Luke well enough, but Lucy has been the one that’s stayed with you over the years.

So if your daughter is Lucy, that means we’re naming a brother for Gracie, Jon, Michael, and Lucy.

We’re ruling out James, and David and Paul aren’t quite right, either. So we need a straightforward boys’ name that works well with his siblings and avoids repeating the initials G, J, M, and L, right?

I wonder if part of the issue is that David and Paul are classic names, but maybe less current? It sounds counter-intuitive, but classic names do trend in and out of favor. I’m going to suggest a mix of traditional favorites that aren’t particularly stylish right now, along with some that are considered quite stylish.

A NAME FOR LUCY’S TWIN

A rock solid classic, Adam remains in the US Top 100. But it’s classic, not trendy.

Yes, Alexander is long. But most Alexanders are automatically called Alex, and Alex sounds perfect with Gracie, Jon, Michael, and Lucy.

Handsome, reliable Benjamin appears across history, from the Old Testament to the Founding Fathers. But Ben feels friendly and approachable.

A classic that remains in style limbo, Peter could be the perfect choice with Jon and Michael.

Sam is just like Ben – traditional in its full form, with casual, every-guy Sam for daily use.

One of the hottest names and a classic, too. Theo sounds perfect with Gracie, Jon, Michael, and Lucy. But you might also shorten Theodore to Teddy or Ted.

I suspect you’d find yourself using Thomas in full, just like Michael. It reminds me of James, with that -s ending, but gives you a different first initial. And, of course, Tom fits in with Sam and Ben.

Maybe my favorite! William-called-Will is a name with history to spare. But it’s not too grand, either, thanks to cozy short form Will. Or, of course, Billy or Bill.

My favorites are Lucy and William-called-Will, or possibly Lucy and Benjamin-called-Ben. Would Lucy Marie and William James appeal? Or maybe Lucy Claire and William Theodore?

Readers, over to you! Do you agree that they should use Lucy for their daughter instead of Luke for their son? And what would you name the other twin?