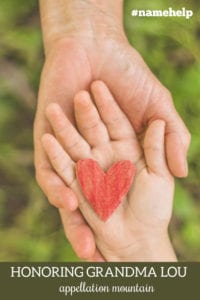 UPDATE: Kayla writes that daughter Louisa Kate arrived last month. Everyone is doing fine. Thanks for the help!

We’re expecting a daughter in March, and we know we want to name her after my grandma Lou. My grandmother’s name isn’t Louise or Lucille or anything like that. She was Phyllis. We don’t know how she got her nickname, but no one remembers her ever being anything except for Lou, even her brother. At her funeral, people she’d known her whole life admitted they’d never known her real first name.

We’ve ruled out naming our daughter just Lou. And we don’t want to use it as a middle name. (It feels kind of like a throwaway.) This is the first great-grandchild, so we really want it to be clear that we’re honoring her memory.

Our last name is short, German, and starts with R if that helps.

How exciting to be expecting a daughter, and what a lovely tribute to name her after your grandmother.

Happily, there’s no shortage of Lou- names. The question is finding on that appeals to you and feels like it makes the connection to your grandmother’s name clear.

You might use names that put Lou at the end: Annalou or Marylou. I kind of love Emmylou because of the singer. But they have a very specific style, a sort of sassy, retro, maybe a little bit of a down home-country vibe.

I’m guessing you might be after something more mainstream, a name that puts the Lou sound at the beginning of the name.

I’ll list a few of the most popular, as well as some of my favorites:

Lucy – From Lucille Ball to the Peanuts, we can all think of a famous Lucy or two. It’s a traditional name, with a long history of use. Lucy has a casual vibe, but it’s been worn by women of accomplishment. And the Lou sound is clear and obvious.

Luna – Luna’s been around, too – it regularly appeared in the US Top 1000 during the nineteenth century. But it’s skyrocketed into the Top 100 recently, thanks to several factors. There’s the Harry Potter heroine, our love of all things celestial and mythological, and a handful of high profile birth announcements for babies with the name.

Lucia – It’s the feminine form of Lucius, and the original version of the name that became Lucy in English. Pronounced either loo-shah or loo-see-ah, it’s a slightly longer, lovely option that’s just familiar enough in the US.

Lula – Originally short for Louise + related names, I think Lula stands on its own in our Lucy-Lola moment.

Luella – Take the popularity of Lucy + Luna, mix in our affection for Isabella and Annabelle, and it’s no surprise that vintage Luella is back again. It hadn’t cracked the US Top 1000 since the 1950s, but it returned in 2017.

Louisa – Literary and romantic, Louisa remains surprisingly rare. It’s both an obvious honor name for Lou, and something longer that your daughter can wear over a lifetime. Slightly shorter Louise makes for another obvious option.

Lucinda – Cervantes probably invented this longer form of Lucia for Don Quixote. It would fit right in on a playground today, but remains nicely underused.

Ludovica – Okay, I know it’s a stretch. But I’ll add it in because I think Ludovica is just downright awesome.

Overall, I think I’d suggest Louise or Louisa for something classic; Luna and Lucy for the most current options; and maybe Lucinda if you’re feeling daring.

But I like the way Louisa and Louise contain the letters Lou, and since your surname is short, I wonder if the longer, more flowing sound of Louisa sounds best when said together.

Readers, what would you suggest as an honor name for Grandma Lou? 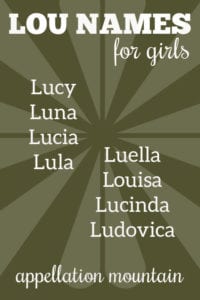