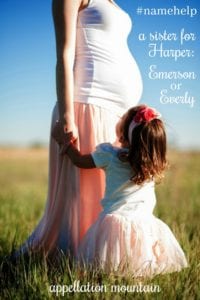 Update: We went with Emery! It was the perfect in-between name, a little bit Emerson and a little bit Everly. Thanks to everyone for the suggestions!

Help! I have a 3 year old named Harper and I am pregnant with our second baby girl who is due in September. My husband and I cannot agree on a name! I cried after I read the last name help post because I realized that I might have to just put aside my favorite name and have a mourning period. I’m just so worried nothing will measure up and baby will go nameless forever …

We want a unisex, masculine name to match Harper. I had always loved Harper and then the Harper boom of 2015 happened and I am trying to avoid that again. Unfortunately for me I think it might be inevitable, as the two names we are going between right now are Emerson and Everly. We also love Harlow so much but took that out of the running because it is too ridiculously close to Harper.

My husband is team Emerson and I am team Everly. I used to love Emerson and thought that would for sure be baby girl #2’s name but then Everly came along and I fell in love with it. Also, I’m worried that Emerson might be a bit long to say and I’m not sure I want people to shorten it to Emie. What do other people think? Any plays on the names Everly or Emerson that I might fall just in love with as I am with Everly?

Any thoughts or insight is MUCH appreciated!!

How exciting to be expecting your second daughter, and I’m so sorry you’re feeling stuck!

Let’s go back to the drawing board. I don’t think you’re looking for a unisex, masculine name – not exactly. I’d describe your ideal name this way: unisex style, but far more common for girls. That’s true of Harper, Harlow, Emerson, and Everly. And while you’re keen to avoid the next big thing in baby names, it doesn’t sound like you’re willing to go to extremes to invent a new name that your daughter will have all to herself, either.

That’s important, because it rules out some possible candidates. I’m guessing that names far more common for boys, like Carter and Logan, are out. And it suggests that inventions, like Everson or Emlee won’t satisfy, either. You might like a name like Sawyer or Rowan, one used in more even numbers for boys and girls. But I’m going to avoid those, too, just in case.

If that sounds like it rules out everything, no worries! You do still have some great alternatives. And that matters, because if you can’t choose between Everly and Emerson, then your best alternative is almost certainly to start with a fresh list. Even though it’s certainly painful to let go of your favorite!

Okay, let’s look at some alternatives.

Ellery – Everly is rocketing up the popularity charts, mirroring the rise of Harper just a few years ago. (In fact, Everly is accelerating even faster!) Ellery is similar in sound and style, and it’s pretty unusual. Just 210 girls were named Ellery in 2017, not even enough to put it in the Top 1000! While I fully expect Ellery to rise in use, it’s still far behind your current favorites. One possible issue? It might shorten to Ellie, just as Emerson could be reduced to Emmie.

Emery – Emlee and Everlee don’t quite work, but how about Emery? It’s almost smack in the middle between Emerson and Everly, sound-wise. There are some downsides here, too: while it ranks just #115 today, it is rising quickly in use. And there are lots of possible spellings, which could make it feel even more popular than it is. And you really haven’t sidestepped Emmie as a nickname, either. But it does feel like the logical compromise name.

Hadley – I’m tempted to suggest more H surname names for girls, because there are so many possibilities besides Harper and Harlow! I think Hadley makes sense for a few reasons. First, it’s got some literary sheen, too. (Hadley Richardson was the first wife of Ernest Hemingway; she’s the subject of the fictionalized bestseller The Paris Wife.) Unlike Everly and Emerson, Hadley is holding steady these days, ranked #113 and falling slightly. Or maybe Haven or Hayes? (Though Hayes is far more popular for boys at the moment.)

Marlowe – If Harlow would be your favorite if only it was so close to Harper, might Marlowe work? Har and Mar rhyme, but I think it’s different enough to work for sister names. Another bonus? While Marlowe is undeniably rising in use, it stands at #981 as of 2017 – the name’s very first year in the US Top 1000. So even if it does rise quickly, your Marlowe will be in kindergarten – or older! – by the time the name really catches on.

Presley – Like Hadley, Presley is holding stable. It ranks #200, and it’s held steady around that mark in recent years. One huge advantage? I can’t imagine Presley being shortened. It’s every bit as nickname-proof as Harper. I also like the way both names share the ‘p’ sound – it makes them pleasing to say together.

Sloane – Of course, if avoiding nicknames is important, maybe a one-syllable surname name would appeal? I like Sloane as a surname name that’s squarely on the girls’ side, thanks to decades of pop culture references.

So where does that leave us? I think it might be time to take Everly and Emerson off the table – at least temporarily – and consider new names. If one of these works better, that’s great!

But if not, it’s also possible that the process of considering a whole new list will serve to make Emerson or Everly feel more attractive.

I know the community will have some more great suggestions, too! So, over to you readers: what would you name Harper’s sister?