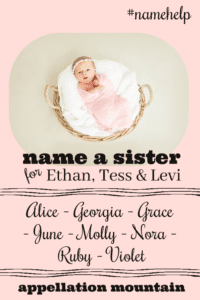 Choosing names has always come easy for us. We named our son about ten minutes after the ultrasound tech declared, “it’s a boy.” Our daughter was down to two or three favorites, but we agreed right after she was born.

Their full names are Ethan Edward and Tessa “Tess” Marie. Edward and Marie are family names that happen to be kind-of-sort on both sides of our families. Our last name is a presidential surname that starts with C and ends with -er.

We are now expecting twins – a boy and a girl. They will complete our family.

We have a name picked out for our son: Levi Andrew. But for a daughter, we’re stuck.

I’m not sure if we have any can’t-break rules, but generally:

Neither of us is very adventurous. We’re not going to have a kid named Blue Ivy or anything like that. But we do know a lot of kids at this point, and names like Olivia, Isabella, Evelyn, and Emma/Emily and Amelia are probably out because we know more than one, though they are all names that we like.

Congrats on your twins! With your new son named, you’re halfway there … now let’s see if we can’t come up some ideas for your daughter.

The more kids you name, the tougher it can get to avoid repeating sounds. We’ve ruled out four letters of the alphabet: C for your surname, plus E, T, and L for your other children’s names. That leaves 22 letters, though, so I think we can work with that.

Alice – Spare and straightforward, but filled with a mix of storybook innocence and real-world resilience, Alice strikes me as a fitting sister name for Tess. It’s a different initial, too, and while I questioned if Ellie and Alice were too close, I think they pass the test nicely.

Georgia – Tessa reads spunky, and so does Georgia. At just two syllables, it doesn’t require a nickname, though Georgie is obvious and available.

Grace – Single-syllable names tend to feel nickname-proof. That’s not quite true, but I think Grace/Gracie falls into the same category as Tessa/Tess – it’s a logical, obvious choice, one that your daughter could use or not over the years.

June – My first thought was Jane, but maybe June feels a little more like a sister for Ethan, Tessa, and Levi? It’s a fresh choice, upbeat and optimistic. But it also feels traditional, the kind of name that we all recognize, even if we don’t hear it often.

Molly – My first suggestion was Lily, but that clashes with Levi. So I substituted Molly instead. In many ways, it’s a traditional name – short for the evergreen Mary. But it’s also casual, a natural sister for Tessa.

Nora – Clara always makes me think of Nora. Because it avoids the initials C.C., would Nora suit?

Ruby – Ruby introduces a new vowel sound into the mix, and has a different first initial, and is pretty mainstream without being too common. Could Ruby work?

Violet – Okay, Levi and Violet might be a little too close. But I like the subtle link with the shared ‘vi’ sound in the two names, so I can’t resist adding it to the list. And I do think Violet meets all of your requirements nicely.

Overall, I’m most attracted to June and Grace. I think Junie and Gracie are nicknames in the same way that Tess is for Tessa. And I like the sound of Ethan, Tess, Levi, and June (or Grace) a lot.

But I know the community will have some great suggestions … so over to you! What would you name a twin sister for Levi Andrew?