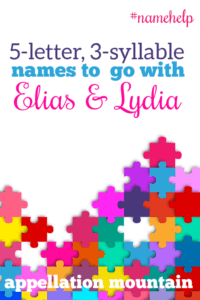 We are expecting our third child in December, and realized we have a fun – but hard to repeat! – pattern. Both of our children have three-syllable, five-letter names. Elias is a family name. Lydia was my favorite girl name since forever. I like that old world feel.

We’ve been brainstorming since before we knew we were pregnant, but nothing stands out to us. Can you and the community help?

Before we dive into three-syllable, five-letter names, let’s start here: do you really want to continue this pattern?

It’s one of those things that you notice, but probably only you. I mean … maybe me. And a handful of other people. But I’d happily overlook it in service of finding a name your family can love.

Because there really only are a handful of boy names that fit this pattern … and maybe a slightly bigger pool of possibilities for girls. Let’s take a look at your options.

Emory – A unisex surname name, Emery feels more like a brother for Elias than a sister for Lydia. Similar names include Amory and Emery. I should note that Emery is in the girls’ Top 100, and Emory is also more popular for girls. I don’t think that’s necessarily a dealbreaker, but it’s good to know up front.

Giani – The thing about this pattern is that it can start to feel a little tortured. Gianni is an Italian form of John; in Italian, it sounds very close to Johnny. But Americans tend to say it with three syllables, so it fits your pattern. If – of course – you’re willing to spell it with a single ‘n’ instead of two.

Mateo – At first glance, Mateo is the same case. The Italians spell it with two ‘t’s. Except Mateo is the Spanish language spelling, and it’s actually in the current US Top 50, more popular than Matteo. So it could work well for your family, regardless of your background. Like Luca, it’s a romance language name that has gone mainstream.

Orion – Maybe the obvious choice, Orion sounds different than Elias and Lydia, but could still fit right in. And it continues the pattern without compromising on spelling.

Ariel – Long before this name belonged to the world’s most famous mermaid, Ariel was a Hebrew name meaning “lion of God.” it can be masculine – and is, in much of the world – but Americans tend to give it to their daughters.

Amara – Another imported name, with roots in multiple languages.

Aviva – A Hebrew name meaning spring. It could fit right in with Ava and Vivian and Evelyn and Olivia, but it’s pretty rare.

Diana – An obvious choice, Diana completes the pattern but sounds like the kind of name you might have chosen for Elias and Lydia’s sibling without counting letters or syllables.

Fiona – Another name in the key of Diana, a lovely name with a traditional vibe.

Julia – And one more! Julia shares five-letter, 3-syllable structure of your older kids’ names, plus the ‘l’ of Elias and Lydia. It might be the name to beat!

Naomi – Another name that feels distinctively different, even though it continues the pattern precisely.

Overall, I’m most drawn to Emory for a boy. And yet, I think that might prove frustrating if you’re bothered by others hearing it as Emily … or just generally a girl’s name.

For girls, I’m torn. I like the way Julia completes the pattern perfectly, but feels different. But I’m more drawn to Amara or Naomi.

Readers, over to you. What would you name a sibling for Elias and Lydia?

Image by Thanks for your Like • donations welcome from Pixabay