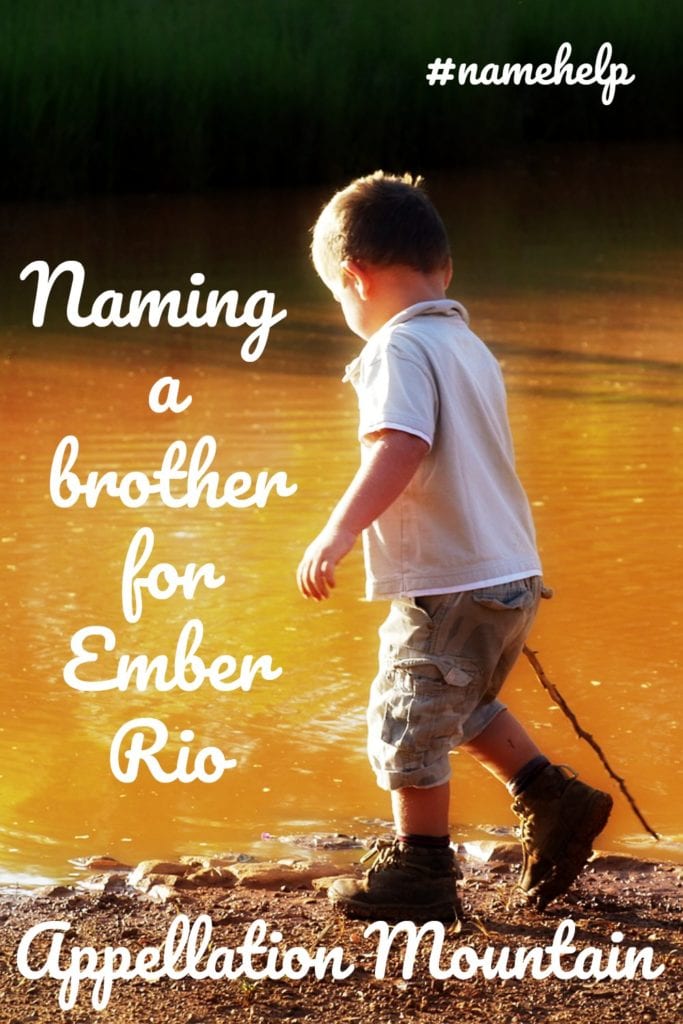 We have a baby on the way and are looking for names to pair well with our son, whose name is Ember Rio.

Our last name begins with a Z, and our preference is to stick with nature names.

Ember Rio is a great name for a son! It clearly nods to the natural world, but it sounds like a first and middle, not two word names.

I’ll start with a name list, and then see if we can mix and match some great combinations.

Parents have embraced animal names like Bear, Wolf, and Hawk in recent years. I think the one with the most potential is Fox. Thanks to names like Felix and Max, Fox feels more like a name than some of these – even though Wolf has history galore. It’s also just entered the current Top 1000, which makes it just slightly familiar.

Names like Canyon and Ridge possess a certain rugged, outdoorsy quality. I particularly like Ridge. It’s just inside the current US Top 1000, but it feels distinctive. Like Ember, it’s obviously borrowed from the natural world, but it feels less obvious than, say, Hawk.

Ocean, Bay, and Lake all come to mind, but I wonder if they’re too close to River? Harbor, Shelter, and Cove also feel very wearable.

We tend to leave botanical names for the girls, and that’s a mistake. There’s Hawthorn, Sage, Alder, Elm, Birch, Grove, Branch, Forrest/Forest, Oak, and a handful of other options that wear well for boys. I really like Hawthorn with Ember.

The Scandinavian name Leif is often pronounced Leaf in the US. That might make either spelling an option.

Night sky names appear throughout the list of popular girl names. There’s Luna and Stella, along with many a rarity. While fewer night sky names come to mind for boys, there are a few. The constellation Orion sounds very much like a brother for Ember. Cielo is the Spanish word for sky – and also heaven – making it an interesting brother name for Rio.

Would you consider a place name that evokes a rugged, outdoorsy feel, like Colorado? Mountain name Everest has also seen some use. I really like Journey, especially in the middle spot, with Ember Rio, too – while it’s not quite a nature name, it has a similar vibe. An ever rarer possibility with a related meaning might be Quest.

Kodiak is an island in Alaska, as well as the name of a bear native to the region.

Ari means eagle in Norse and lion in Hebrew. Would that appeal?

Calder reminds me of caldera, as in the craters at the top of volcanos. Too much of a stretch?

One of the challenges is finding something that pairs well, without sounding too much like a sentence.

I keep coming back to Fox Hawthorn and Ari Everest, but I love so many names on this list.

Readers, it’s your turn. What nature-inspired name would you name a brother for Ember Rio?