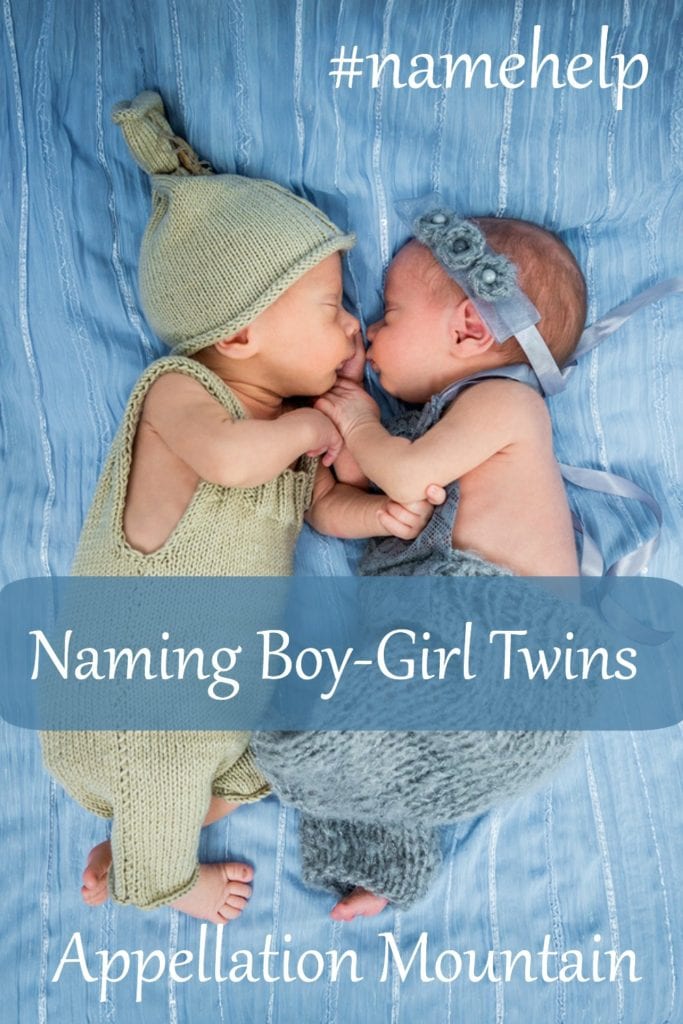 Name Help is a series at Appellation Mountain. Most Saturdays, one reader’s name questions will be discussed.

We are expecting boy-girl twins in early 2017, and are having a hard time finding names that sync with their older sisters, as well as each other.

Our daughters are Kezia Iris and Beatrix Louisa. Iris and Lou are family names.

For a girl, we like Colletta, Georgine, and Alvera – all family names, as well as Florence. For a boy, we like Norris, Ralph, Harlan, and Henry – all are family names. I think Henry is too common, but still love it. Ansel is also on our list, and maybe Ambrose.

Our last name sounds like Doll. Thank you for your help!

How exciting to be expecting twins!

At first, finding names flummoxed me. Nothing seemed quite right. But then I realized something. You just plain love your daughter’s first names. Most of your current list consists of family names.

Nothing wrong with that, of course. Good reasons abound to choose family names. But since you’re stuck, let’s take a step back, and focus on names that you like.

Based on Kezia and Beatrix, we’re looking for a rare name with vintage appeal, something feminine, but maybe a hint of an edge, too. I’ll also throw Florence into the mix. since that makes the list just because you love it.

Names for a Daughter

Agatha/Agnes – Parents are starting to rethink Agnes, thanks to the adorable little sister in Despicable Me. That might just open the door to using Agatha, too. If you prefer to skip nicknames, I’d suggest Agnes. If the idea of using Aggie as a short form appeals, I think Agatha might pair better with Kezia and Beatrix.

Harriet – I used to consider Harriet sort of solid and reliable, but a reader mentioned that she saw Harriet as light, pretty, even frilly – and suddenly, I found myself rethinking this name. Juliet makes the list of modern favorites, a name as romantic as they come. Harriet feels a smidge more serious, thanks to the many accomplished women by the name – Tubman, Beecher Stowe, Jacobs, the Spy.

Eugenie – The French form of Eugenia, Eugenie is familiar thanks to Princess Eugenie of York, cousin to Will, granddaughter of Queen Elizabeth II. It’s never been common in the US, but it shares sounds with very current names. Think of Lucy and Genevieve. And three-syllable, ends-in-y or -ie names for girls appeal, generation after generation.

Millicent – Sweet and strong, Millicent comes from the Germanic Amalswintha. We’ve reserved the name for fictional mice and such in recent decades, but if Matilda, Millie, Molly, and Madeline today, why not Millicent?

Sylvie – I’ve saved the best for last! Kezia and Beatrix both possess show-stopping letters – z and v. This makes me wonder if their sister should also get a high-value Scrabble letter name? Sylvia might be an option – though it ranks in the current Top 500. Sylvie, the French form of the name, remains outside of the current rankings. Kezia, Beatrix, and Sylvie sound exactly right together.

Names for a Son

Let’s pause for a minute before we talk specific names. It’s worth noting that parents often have slightly – or totally – different naming styles for sons and daughters.

Avoiding extremes is typically best, though I suppose somewhere out there a sibset consisting of William Archibald Lawrence and Fifi Mae is doing just fine.

But here’s the thing: parents often cheerfully venture beyond the Top 1000 for their daughters’ names, but are reluctant to go so far when naming a son. Your shortlist mostly consists of relatively rare names, like Ansel and Ambrose. But that lingering love for Henry makes me wonder – might you prefer something a little more mainstream for a son?

George – George remains less popular than the equally regal Henry. The name hovers just outside the Top 100 in the US. And yet, you could never call George fleeting or trendy. It’s a rock solid name for a son, one that works well with Beatrix and Kezia.

Harold – You couldn’t choose both Harriet and Harold. But either one works! Maybe I’m looking for cousins to your beloved Henry. But I do think Harold has the same so-far-out-it’s-in vibe as Kezia and Beatrix. The name is teetering on the edge of rediscovery.

Alasdair – I love Alasdair, even more because it’s seldom heard in the US. Spelling might present a hurdle, and Alistair is an option, too.

Lionel –  Have you considered the longer Leo- names? While Lionel doesn’t quite sound like Leo, something like Leopold or even Leonidas does. Lionel hits that antique, just ready-for-revival note of Kezia and Beatrix.

Barnaby – I suggested Eugenie for a girl, which makes me wonder if you might like a three-syllable, ends-in-y name for a son? Barnaby combines a long history of use and an edgy, unexpected sound. The only downside to Barnaby, is that your son would share a first initial with an older sister – but since you’ll have four children, and two of them won’t have B names, I think that’s less of a concern.

Overall, I love the sound of Sylvie with Kezia and Beatrix. Boys’ names are so much harder in this case, maybe because it’s the first time you’re choosing one! I am, truly tempted to encourage you to use Henry. Yes, it’s very popular – but that’s because it’s a great name! And there’s something to be said for using a popular name regardless of what the data says.

Readers, now it’s your turn! What would you suggest to Rachel for her twins on the way?