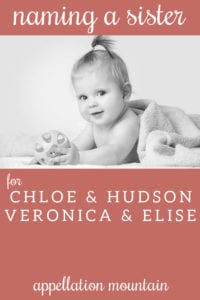 We’re expecting our first baby together in 2021! It was a complete surprise, but the best kind of surprise. I’m 43, and we’ve only been together for a year, so to say this was a shock is the understatement of ALL understatements.

This baby – it’s a girl! – will join my 7 year old twins, Chloe and Hudson, plus my husband’s teenage daughters, Veronica and Elise. For this past year, all of the kids have overlapped at our house a lot, but I’m guessing that’s not going to be true for that much longer. (Can I hope?! Oh, the LAUNDRY!)

With everything going on, names kind of fell off our list of things to think about. But the girls brought it up over Christmas, and now we have a list made by all six of us.

And that’s okay! I think it’s kind of great, really. But I’m not sure which of these names sound like they go with our family.

Also, I found this site because we’re not sure what to do about our last name. I’ve always kept my maiden name; my kids have their dads’ last name, the older girls have their mom’s last name hyphenated with my husband’s surname, and my husband has just his original last name. So we already have FOUR surnames in our family. Which is fine, but it makes me wonder what last name to give this baby. So advice on how to choose that would be SO great, too.

Here’s our list of names we all liked (or at least no one said was awful!)

Is there another name we’re missing?

Please read on for my response and leave your thoughtful comments in the suggestions.

Congratulations on your baby. That is the most wonderful kind of surprise, right?

I wonder if you might want to start by considering your child’s last name. Not because you have to choose that first, but because knowing it will naturally help you narrow down your list. Some firsts just won’t sound as good with certain lasts.

To help puzzle it out, I’m going to insert some generic surnames. Your family consists of:

That’s a lot of surnames, but the three basic options are: Smith, Jones, and Smith-Jones.

I’m not sure if the surnames you’re working with are that short, but the hyphenated name will inevitably be longer. A longer surname probably works best with names like Rose and Miles. And something like Lily-Rose Smith-Jones probably feels cumbersome – a hyphenated first and last.

There’s really no right answer, and no way to have everyone in your household share a single surname. (Which is completely, absolutely fine, and if it makes your Christmas card signature a little longer? So be it.)

I’m going to suggest you hyphenate: Smith-Jones. Partly because I’m curious to see if that feels right. Or if it feels too complicated/cumbersome. Maybe it’s the option to rule out first – maybe because it gives this daughter a surname specific to her point in family history. (If that makes any sense at all!)

Moving on to first names!

A SISTER FOR CHLOE, HUDSON, VERONICA, and ELISE

Chloe, Veronica, and Elise sound like sisters. They’re familiar, mainstream choices, conventionally feminine but not especially frilly or super-traditional. Looking through your list:

If we narrow the list to Piper, Savannah, Stella, Naomi, Lily, and Rose, my vote goes to Stella. I like the vintage sound and style, plus it’s shorter. And while I can imagine any of these six names working well, Stella just seems like it locks into place.

Plus, you brainstormed names over Christmas, and Stella means star – so maybe that part of the story is swaying my opinion, too?

I’m not sure you’re missing any names, really. If I were starting from scratch with Veronica, Elise, Chloe, and Hudson, I might suggest:

GEMMA – A more mainstream alternative to Jewel, with the same meaning.

GENEVIEVE – A traditional name that isn’t heard too often, though if you opt for a longer surname, it might feel like a bit too much.

IRIS – A flower name a little less common than Lily and Rose, and every bit as lovely.

MAREN – A little more tailored, like Piper, but closer to a given name than a surname.

I’m not sure any of these tops Stella. You haven’t mentioned middle names, but if that’s up for discussion, Stella Kinsley could be great together.

Readers, what would you suggest for a sister for Chloe, Hudson, Veronica, and Elise?