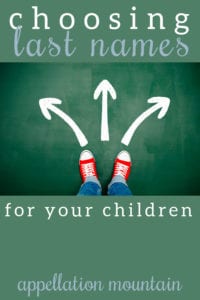 For many years, for most American families, this wasn’t a conversation. Women married men. They took their husband’s family surnames. Their children shared that name, too.

I’d say “end of discussion” except … it wasn’t even discussed. It was simply the way of the world.

Now, though, we have choices.

Even if you ultimately default to the twentieth century American tradition, it’s good to recognize that choosing your child’s last name offers alternatives. And some of those options might be exactly what your family needs.

I’m listing these from the most traditional to the least, though obviously, there’s some room for argument.

EVERYONE TAKES THE FATHER’S SURNAME

In the America of Leave it to Beaver, the entire family shared one surname: his. We don’t know if Mrs. Cleaver felt like she was missing out, because there simply wasn’t another alternative.

There’s an ease to this that feels enviable. You’re a unit – the Cleavers.

And yet, it requires women to surrender a part of their identities at marriage. For some women, this is a non-issue; they’re early in their careers or not attached to their family names. Maybe even eager to shed them, for any number of reasons.

But for others? This is painful. They’re professionally well-established using their birth names and the switch feels awkward. Or they’re the last in their family line, and giving up the surname feels like a painful loss, rather than something gained.

While we tend to associate this with the most traditional families, plenty of same-sex couples do agree to take one partner’s surname, too. It’s not necessarily a conservative or retro perspective to feel like sharing a family name matters.

THE KIDS SHARE DAD’S SURNAME, BUT MOM KEEPS HERS

Emily Blunt marries John Krasinski. Their kids are Krasinski, but she remains Blunt.

This is so common that it’s hardly complicated. Maybe the mom is called Mrs. Krasinski from time to time. But there’s no practical barrier to managing a family with two surnames. And retaining your birth name feels right for many women.

And yet, it does leave the mom the odd one out. Most families don’t seem to give this a second thought – most of the time. But it does need to be explained. I met a new family recently. “My daughters are Ella and Marie Jones. I’m Emily Smith.” No big deal, but also not quite seamless.

Again, same-sex couples might make a similar choice, particularly if continuing a family surname matters more to one partner.

USE THE SECOND SURNAME AS A MIDDLE NAME

Nothing says both surnames require equal billing. It’s very possible to give your child the unused surname as a middle name – think Mason Smith Jones, or Mason William Smith Jones.

The downside is that middle names can sometimes disappear. We might choose to emphasize them, of course. But family surnames have been stuck in the middle spot for ages, and they’re often reduced to an initial – Mason S. Jones – or dropped entirely – Mason W. Jones.

Still, it preserves both family names in your child’s identity. While it’s most common for the mother’s name to take the middle name spot, there’s nothing that says it has to be that way, either.

I suspect this pleases family genealogists, eager to ensure that future generations can trace their third cousins. And it might feel more balanced, including both sides of the family in your child’s name.

This often feels like the most equitable approach. Except … who hyphenates?

The family can be Andrew Jones and Jennifer Smith, parents of Mason Smith-Jones and Ella Smith-Jones.

One or both parents might hyphenate, too. Again, we tend to put the mother’s name first, but of course, there are no rules.

The downside, of course, is that hyphenated names can be complicated. They flummox databases, confuse the person alphabetizing nametags and diplomas. They’re misrecorded.

And yet … convenience isn’t necessarily the best way to make a naming decision. If keeping both of your names matters, and having a family surname matters, too, then this is a viable option.

EVERYONE TAKES A MUTUALLY AGREED UPON SURNAME

Or it might mean something akin to hyphenating, taking a new surname composed of pieces of both family names: Jennifer and Andrew Smithjones. Or Jennifer and Andrew Jonsmith. It requires more paperwork – maybe – but neatly sidesteps the challenges of hyphens and databases and “does this go under J for Jones or S for Smith?” debates.

Some couples choose to start fresh, with a surname that represents their new family. This feels both incredibly appealing and intensely challenging. The best case scenario might be surnames like Evergreen, signalling commitment but not seeming particularly invented.

On the other hand? Kate Winslet’s third husband gave himself the surname Rocknroll. She stuck with Winslet – and their son took her last name, too.

Absolutely nothing says that partners have to share a surname. That goes for siblings, too!

You might give all of your daughters their mother’s surname, while all of your sons take their father’s surname. (Or vice versa.) A couple could alternate – their firstborn is Mason Smith, and their second is Ethan Jones.

In an age of divorce and remarriage, siblings with different surnames feels unremarkable. Might you get a few questions? Sure. But maybe fewer than you’d imagine.

USE ONE SURNAME AS THE FIRSTBORN’S GIVEN NAME

Remember Miranda Hobbes of Sex and the City fame? She wasn’t in a committed relationship with Steve Brady when their son was born. They name their son Brady Hobbes.

It’s a twist on a longtime tradition of using the mother’s maiden name as part of a child’s given name.

When the couple finally did marry, of course, they were Steve Brady, Miranda Hobbes, and Brady Hobbes. But she could’ve been Miranda Hobbes Brady or even Miranda Brady, and their son’s name still worked beautifully.

One shortcoming: it solves the problem for your first child. Subsequent children mean revisiting the issue anew.

How did you approach choosing your child’s last name? 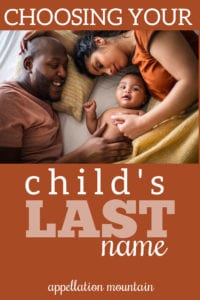