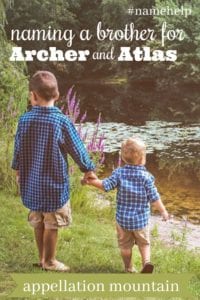 We’re having a third boy this autumn! I’m having a hard time finding any names that I love. I know I definitely don’t want another A name. I don’t have to have another animal middle. I do require a nickname option, though. I greatly enjoy using nicknames for a nice, full feeling name.

I feel like I’ve looked at hundreds of names. I might like Wilder? I don’t know if it feels good enough though. My name love is Dashiell but my partner dislikes it too much to compromise. Help?

It was so much fun to help you think through a name for Atlas Fraser Finch. And it’s a great choice! But here’s what jumps out at me – and it sounds like you’re feeling it, too – there’s a lot of pattern set.

Both of your boys’ names:

That leaves this puzzle: which matching parts do you keep?

Let’s start with the assumption that all A first names are out, but that stylish/slightly unexpected matters.

It sounds like your long-time favorite is Dashiell, but that’s at the top of your partner’s nope, no thanks list. Too bad, because it goes well with Archer and Atlas.

Wilder fits, too. Except it might leave you searching for an easy nickname. Archie and Atty clearly come from Archer and Atlas. Would you call Wilder … Willie, maybe? That doesn’t quite seem like your style. Wiley, maybe?

When you were expecting Atlas, I suggested Beckett, August, Louis, Harrison, Leland, Dexter, and Donovan. I’ll skip them all this time, but I did want to revisit one from the prior post: Finley. As I noted last time, Finn might be a little too popular. But if you’re not sold on any animal-inspired middle names, the advantage of Finley is that it does bring to mind all be-finned creatures, which means your third son would have a vaguely aquatic-inspired name.

Or maybe that’s not good enough? Since potential animal, or maybe even just nature-inspired, middles abound, let’s focus on firsts.

I find that I’m really struggling to find two-syllable names that shorten to two-syllable nicknames. Surely there are some I’ve overlooking! But I also suspect that’s more accidental than intentional pattern, so I’m not going to worry too much about that.

Caspian – A place name with literary ties, it sounds like a brother for Archer, Atlas, and Caspian. There’s a certain adventurous spirit all three names share. It shortens to Cas and Cap, and maybe even Ian. (Or Cian, with a hard C sound?)

Dempsey – Maybe it’s the upbeat Irish appeal of this surname name; maybe it’s boxer Jack Dempsey, a world heavyweight champ back in the day, that lends the name a certain fire. I think Dezi or Dez could be a great short form of Dempsey.

Forrest – A preppy surname with an outdoorsy vibe, Forrest is both relaxed and ready to climb a mountain. At first glance, nicknames are elusive, but I like the idea of shortening Forrest to Ret – though maybe I’d spell it Ret?

Lennon – Archer and Atlas make great brother names, but in many ways, they’re different. One is a surname; the other, borrowed from myth. Lennon feels like it bridges the two. Sure, it’s a last name promoted to the first spot, but it’s also inspired by a legendary musician. Bonus? It shortens to Lenny, Len, and maybe even Leo.

Linus – While I’m thinking Leo, could Linus be Leo – or maybe Lio? I suggested Leland last time, and I still think it’s great with Archer and Atlas. But since it wasn’t for you, maybe Linus would work instead? I think it’s among the greatest of the undiscovered boy names.

Orion – Archer and Atlas both appear in the night sky, so maybe Orion is the logical name for their brother? It shortens to Ry, Rio, and Rion, Ory and O.

Orson – Orson borrows a little something from Archer’s name – it means bear. But I think that’s a subtle enough link that it feels meaningful, not repetitive.

Rodney – Roderick, the big brother from The Diary of a Wimpy Kid series, popped into my head this morning. Could Roderick or Rodney be ready for revival? In fairness, Rodney peaked in the 1960s and Roderick in the 1970s, so they haven’t been gone long. But something about Archie, Atty Finch, and Roddy seems very appealing. For an even rarer name, maybe Riordan would work?

Sullivan – I feel like Sullivan, shortened to Sully or Van, makes for an obvious choice with these boy names.

Tennyson – Tennyson might be a little bit longer, but I think it works well with Archer and Atlas. It’s poetic, but veyr wearable, and Ten and Tenny make appealing nickname options.

I love the idea of Archie, Atty Finch, and Leo, but I wonder if the rich nickname possibilities in Orion aren’t the better choice?

Readers, over to you! What would you name a brother for Archer and Atlas?