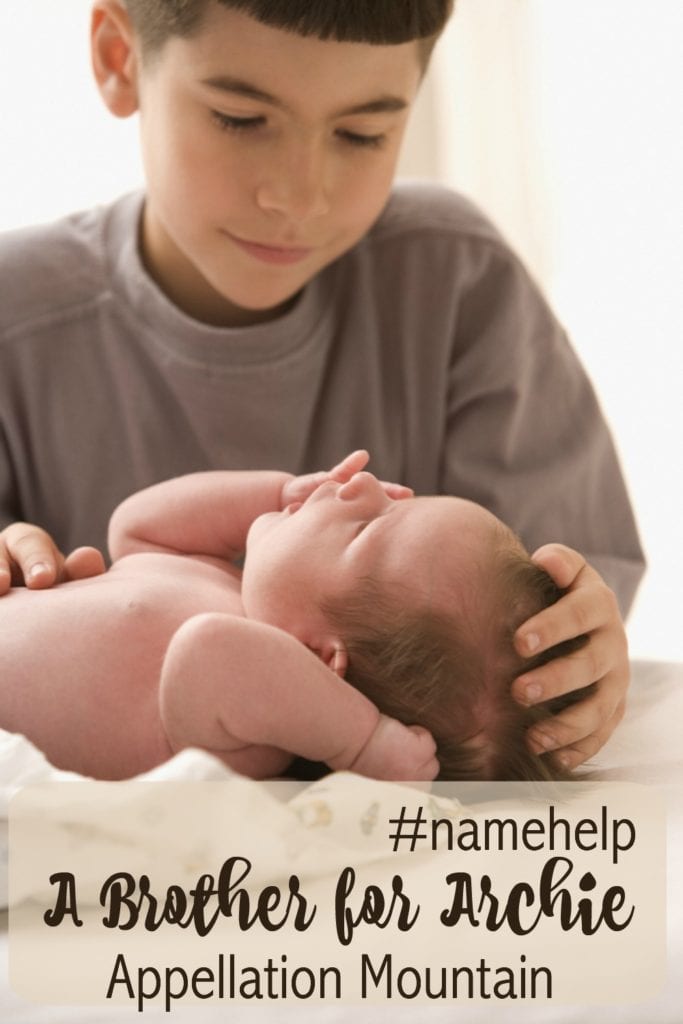 Please help us find a name for our second son, due in November!

We have one son already, Archer Cohen Bear, called Archie.

We are having a common naming problem, where we can’t seem to find names we both love.

I feel strongly against using any names in the top 100, popularity wise. Preferably way farther down the charts.

I can maybe compromise on Bennett but I don’t love it. Could you help us find something we both might love?

Here’s the thing: you got it so very right with your firstborn. His name combines the familiar and the unexpected; a cool, modern first and a vintage, zippy nickname. It raises the bar for naming his siblings, right?

Two names jump out at me from your current list:

Beckett – Beckett is a little less common than Bennett, and comes with the very cool nickname Bex. Which yes, is a little celebrity footballer. But with names like Jax so popular, I think it fits in. Beckett ranked #218 last year.

August – Your list is heavy on the surnames, but it sounds like your husband prefers slightly more traditional choices, like Anthony. August might split the difference. The name boasts a long history of use, but it hasn’t been wildly popular in the US in recent years. At #195 last year, it’s not rare – but it’s certainly not Mason or Liam. The reason I put this one on my list is nickname Gus – Archie and Gus sound just perfect together, and I like Archer and August together, too.

Louis – Louis is sometimes pronounced Louie, which is closer to the French pronunciation of the name. In American English, I typically hear Louis pronounced just like the surname Lewis. Again, this comes closer to your husband’s style – though maybe it’s too mainstream for you?

Harrison – Archer and Harrison sound like brothers. Plus, Archie is big in the UK, and so is Harry, which makes me think that Archie and Harry would work nicely for brothers in the US, too. At #119, Harrison might be a smidge too popular for your tastes.

Leland – Leland ranked #381 last year, which surprises me. It’s a great name – another surname, this time from a place name – but it feels quite distinctive, even rare. Leland might shorten to Leo, which seems like a good brother for Archie.

Dexter – I love, love, love the idea of brothers called Archie and Dex! My image of Dex is forever shaped by Cary Grant’s handsome character in The Philadelphia Story, C.K. Dexter Haven, called Dex by Katharine Hepburn’s character. At #411, I think Dexter probably hits the not-too-popular, not-too-weird mark nicely. But do you mind the repeating ends-in-r sounds of Archer and Dexter? I don’t think it’s a problem, but some parents prefer different endings.

Donovan – I see Sullivan on your list. Would you like Donovan? The sounds are similar, and both names suggest nickname Van. At #282, Donovan is more common than Sullivan, but certainly not wildly popular.

Finley – Phineas is a great name, so I wonder if one of the Fin- names might make a compromise choice? Surname Finley is used for boys and girls; Finnegan is almost exclusively masculine. They both reduce to Finn, which is also popular as a given name. The slippery part here is popularity – with so many Finn names, it’s very possible that you’ll know more than one child with some variation of this name.

I think my favorite is August, followed closely by Dexter. In both cases, they’re a little close to Archer – but not in a way that I find too close at all.

Readers, what would you suggest to Remy and her husband for Archie’s little brother?