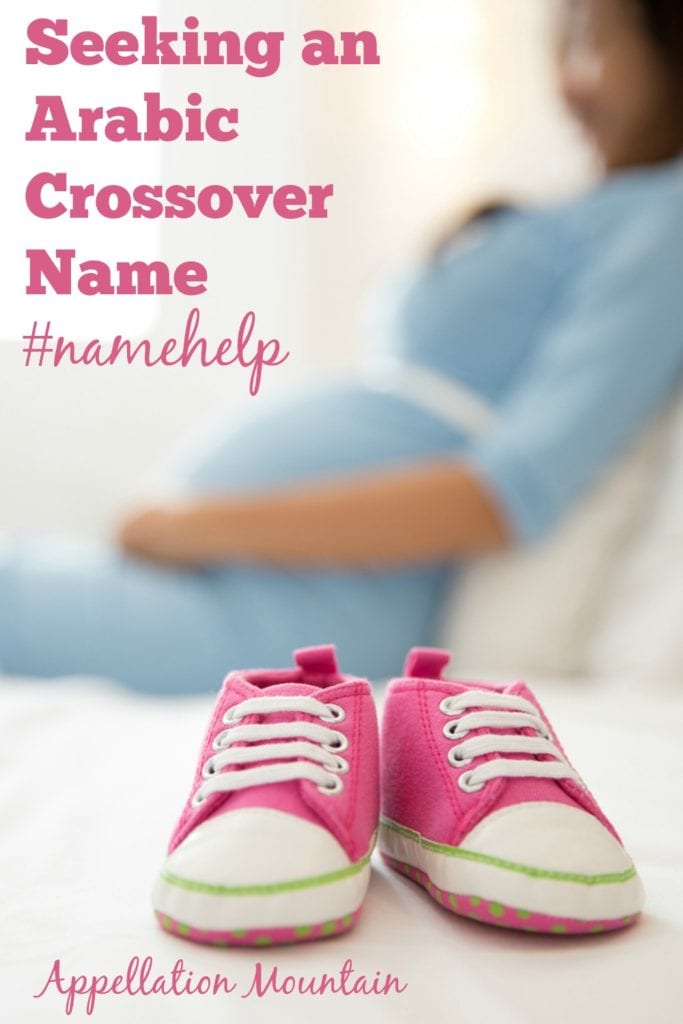 Name Help is a series at Appellation Mountain addressing one reader’s name questions.

I was a single mom when I had my son, Theodore Peter George, called Teddy. Our last name is an English prince’s name starting with W, with an s on the end.

Six years later, I am married and we are expecting a daughter in March.

If naming was left entirely to me her name would probably be Edith, Winifred, Winnie-Mae, Agnes, Esme, Zinnia, Marigold, or May/Mae.

But my husband is from a Lebanese background so we need a name that is going to work in both English and Arabic – either a cross-cultural name with Arabic origins or a name that has a sort of sing-song or lilting quality so it’s easy to write in Arabic.

All of the names that I love are too difficult in Arabic except May, but my husband is not enthusiastic.

We also want a name that won’t seem completely different to Teddy since it’s important to us our little blended family is unified, especially because our daughter will have a hyphenated surname. (Her dad’s surname is pronounced rif – eye – ay.) Because her surname will be long, we will probably not give her a middle name.

We were also hoping for a name that has a nice literary or historical association but that just seems impossible at this point!

I’d love to LOVE the name we choose. But I’m starting to feel a bit over the naming process.

Congratulations on your daughter on the way!

Before we talk names, there are a few things I want to mention:

Now, a disclaimer: I don’t know any Arabic. And because it’s a global language, I’m sure there are regional differences that I can’t even begin to guess. Some of these may seem dated or just plain odd to your husband’s family. That said, I think these seem like a good starting point.

Lina or Lena – I think Lena, especially, makes a great stand-alone name the feels like Edith and Winifred, but satisfies the lilting quality. Maybe you’d like it best as one of those formal name-nickname compromises. Plenty of longer names could shorten to Lena/Lina – maybe Helena?

Nora – Again, Nora feels like a sister for Edith or Winnie, but could be short for a longer name, like Eleanor. A bonus? It’s Noor – or Nur or Nura – in Arabic, and the meaning is lovely – light. If Eleanor seems too mainstream for you – and I think it might! – you could also consider Honor, Honora, or even Honoria or Honorine as longer forms of the name.

Louise or Louisa – I can imagine sisters called Louise and Agnes – it strikes me as exactly right for your style. But I’m adding it here because I’ve read that Lulu is used as a girls’ name in Arabic. (See disclaimer above!) Bonus: Louise and Louisa remain pretty rare in the US, and while that might not be why you like those names, it does strike me as noteworthy.

Lucia – Yes, I’m still on the Lu- names. And Lucia claims no ties to Arabic whatsoever. That said, it does travel throughout Europe and Latin America well. Based on the idea of lilting names, and the Lulu note I mentioned above, I wonder if it’s worth a look. After all, Louise and Lucia sound like sisters for Theodore in a way that some other names might not.

Aveline – I’m never sure how much overlap there is between Persian and Arabic names, but I’ve seen Ava listed as a name in Persian, which makes me think it might work.

Mary, Marianne, etc. – You mentioned that Mariam doesn’t feel like a fit, but I wonder if you’d consider a more familiar form of Mary. While this might not work for every family, our children’s grandparents speak Polish; they typically refer to our children by the Polish equivalents of their English names. I can imagine that Mary could be Mariam some of the time. The question, of course, is whether you are open to the idea. (To be honest: I almost fell over when I realized what my in-laws intended to call their grandson – I actively dislike the sound of our son’s name in Polish! But it grew on me, and I appreciate the both/and appeal of having a name that works across languages.)

Vera – Would Vera be considered lilting? I don’t hear it that way, and yet, I suspect it might work. The name feels more like the antiques you love.

Lila – I hesitate to add Lila for a few reasons. First, Layla seems like the ultimate English-Arabic crossover; if you don’t care for Layla, you might not like Lila. It’s also close to Lilia, which isn’t your favorite. But Lila would work in Arabic, and it does have a long history of use in the US – far longer than Layla, actually. It’s worth a minute’s consideration.

Overall, I’m most tempted by – Vera – especially with a middle name or two. Vera Mariam, maybe? Though if the Lou- and Lu- names, combined with an Arabic-friendly nickname, are an option, I would love the idea of Teddy and Lulu, Theodore and Louise. Or, of course, Louisa, if the -a ending makes it easier to wear.

Readers, I feel like this is one of the bigger #namehelp challenges! I’d love to hear from you – especially if you’ve named across cultures and languages.