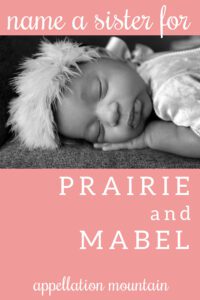 Hi! I’m in need of advice or suggestions. We have two little girls, Prairie and Mabel, and a third on the way soon!

Any help on a sister name would be so appreciated.

We are struggling to agree on much, if any, and want it to flow with the others.

Based on Prairie and Mabel, I’m guessing your preferred name is:

I’m tempted to call your style cottagecore, mostly because I picture Mabel and Prairie climbing trees somewhere and maybe baking bread. But … that doesn’t really narrow down the list!

An early twentieth century favorite, Mabel is slowly enjoying a revival, reaching #427 as of 2020. Prairie, on the other hand, has never ranked in the US Top 1000. But it’s more popular now than it was just a few years ago – even if it’s still really rare.

That makes me think that we’re looking for a name that probably won’t crack the current US Top 500.

If popularity doesn’t matter to you? I’d be tempted to suggest Luna. It’s vintage, but feels modern. Like Prairie, it’s drawn from the natural world – but it’s a little less obvious, so it’s not quite two-nouns-and-a-name.

But it’s most important, I think, to strike a good balance between your girls’ names, particularly since you mentioned flow.

A SISTER FOR MABEL and PRAIRIE

Equal parts sweet and gutsy, Bonnie is a shapeshifter of a name. It’s not a perfect style match for Prairie or Mabel, but I think it pairs well with them both.

It’s tough to define Della. A former favorite, Della is rising in use, thanks to years of Bella and Ella names near the top of the charts. But Della remains nicely distinctive. Another similar choice: Delia.

I kept coming back to the idea of surname names, but they often felt a little too close to your girls’ names. (Prairie and Parker could be a tongue twister, and Mabel rules out Marlowe.) But then I thought about Ellis. It’s close to classic Alice, but far less expected.

It comes from the word jovial – happy or joyful, and was likely invented for Christmas movie Elf. It fits right in with Josie and Ivy, but stands out, too.

If Luna is too popular, would Leda work? A name from Greek myth, it’s a good balance of old-fashioned and current.

An active, energetic name, Scout is tempered by the enduring character in To Kill a Mockingbird.

Winnie feels a little more clearly vintage than either Mabel or Bonnie, I think – but still feels right.

After re-reading this list, my favorite – far and away! – is Pearl. I can picture Prairie, Mabel, and Pearl in cowboy boots or ballet slippers. They’re feminine but strong, vaguely vintage but at-home in this century.

I’d put Leda in the second spot, a good mix of the unexpected and the stylish.

Readers, I know you’ll have some great suggestions! What would you name a sister for Prairie and Mabel?