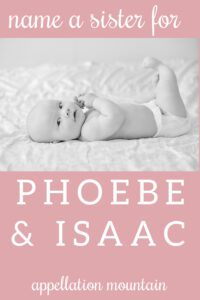 You and your readers were such a huge help in naming our son, but now I’m back for help naming our third!

We are expecting a little girl who will join big sister Phoebe and big brother Isaac, who is almost exclusively called Ike.

We like names that are hard to pinpoint to a specific time period, and I prefer names with a special meaning.

I can’t decide how much I care about a name’s popularity. While Isaac is certainly high on the charts, I do like that he goes by a name that I don’t hear often.

Matching a name with Phoebe and Isaac feels daunting. Between all of those vowels and the Biblical origins, the only name that seems to match is Naomi which has the bonus of a sweet meaning. Unfortunately my husband has vetoed that choice.

If I look at matching Phoebe and Ike to a sister‘s name, I feel like there are more possibilities. Our favorites thus far, though none feel perfect, are Bridget, Georgia, Natalie, and Margot.

To me, Georgia feels less quirky than Phoebe and Ike, but Bridget feels less timeless. Is Margot too trendy with the recent rise of Margaret? Is Natalie timeless or just tired? Of course, if I bring meanings into the mix, Bridget is the only one that seems “special” enough. I just don’t know if any of them feel right!

I know I’m overthinking this, so please write some sense into me. Am I overlooking a perfect name for our girl or do I already have one on our list?

Naming our children is the one parenting responsibility that seems to get harder as our families grow.

Sometimes, it’s because we’ve created a pattern. Or have used up our favorites. In this case, it sounds like you’ve chosen two great names already, and there’s just lots of pressure to do the same for this child.

The good news is that Bridget, Georgia, Margot, and Natalie all seem like good matches for Phoebe and Isaac/Ike in lots of ways.

Quirkiness is in the eye of the beholder. I think I’ve probably called Georgia quirky. Or at least spirited? Georgette is more obviously offbeat, but I’m not sure you have to (or should!) go that route.

Ditto timelessness. For everyone who thinks Bridget is trending, someone else will exclaim that it’s an old-fashioned name you don’t hear much these days.

And classic names DO trend. This observation tends to raise protests. But it’s true! Henry is as classic as they come, but it’s a classic boys’ name that’s considered quite stylish today. Margot/Margaret are rising in use, so they are trending … but they could never be trendy, not in quite the way that a name like Harper or even Luna might be.

BRIDGET “exalted one; goddess of fire”

Bridget soared in the early 1970s, thanks to the short-lived but successful sitcom Bridget Loves Bernie. In many ways, Bridget is like Phoebe – a name everyone knows, but relatively few people are choosing. Phoebe currently ranks #256. At #747, Bridget is even less common.

There’s something sparky and high-energy about Georgia. The name just bounces with that double-G energy. At #176, it’s comparable to Phoebe in terms of popularity.

Do you remember 2001’s The Royal Tenenbaums? Gwyneth Paltrow played Margot. It took a few years, but Margot eventually started climbing, along with other ends-in-o names for girls, like Harlow and Willow. Today it ranks #234. It’s almost the definition of a smart, traditional girl’s name with a breezy, modern sensibility.

A century ago, Natalie was about as common as Phoebe, Margot, or Georgia are today. But Natalie entered the US Top 100 back in 1976. By 1996, it was a Top 50 choice. And it stayed in the Top 50 through 2019, peaking at #13 in 2008. That makes it almost exactly like Isaac … but probably without the easy, unexpected nickname Ike. (After all, Nat/Nate are shared by a generation of boys answering to Nathaniel and Nathan.)

All four names have big, consonant-rich sounds that stand up well the -bee of Phoebe and the strong K sound in Isaac/Ike. And despite some differences, I think they all match well.

As vowel-forward as Naomi. At #138, it splits the difference between Phoebe and Isaac in terms of popularity.

Yes, in some ways, this is Emma-with-a-G. But Gemma means jewel, which could be perfect. And, at #207, it hits a popularity sweet spot.

JUNIPER “from the juniper tree”

At #172, it’s around the same spot as Gemma. Like Gemma, Juniper feels quite modern – but there’s a case to be made that this name has centuries of history.

Originally short for Adelaide (via the older form Adelheid), Heidi is a storybook name that feels nicely vintage and very at-home in the twenty-first century. Ranking #381, it’s immediately familiar but not at all common.

Sylvie may be a rising style star, following other middle-V names like Ava and Ivy up the charts. But at #776, it remains quite rare.

A traditional name with a spirited sound, Veronica ranks #380 – again, not too popular, not too rare.

From your list, I’d still put Margot at the very top, followed by Georgia.

But right behind Georgia, I’d like Sylvie, Eloise, and maybe Gemma.

In fact, Gemma seems like a great alternative to Georgia. There’s a similar sound, but with a distinctive, even glittering, meaning.

Readers, over to you! What would you name a sister for Phoebe and Isaac/Ike?