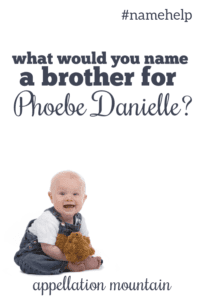 He’s here! An update from Kalie:

We absolutely loved the suggestion of Hugo, but it wasn’t a great match with our last name when we said it out loud.

Calvin, Jonah, and Malcolm were three front runners, but they all were kind of like Emmett. We liked them, but they just didn’t feel like the name.

After reading your article, “In Defense of Nicknames: Ten Reasons to Embrace Nickname-Rich Names,” I had a brilliant idea. I went back to one of my original favorites, Ike, but pitched it as a nickname for Isaac.

Although Isaac is a little too popular for my taste, it made my husband feel much better to know he had a “classic” name to use if he chose. However, since he was born, he’s just been Ike to us.

For a middle name, we ended up going rogue and using Dad’s name, Gregory. The other family names just didn’t fit quite right in the middle slot.

Although we didn’t use a name from the post, your take on nicknames was completely eye-opening. Thank you for your help in naming our sweet Isaac Gregory. All of us, especially Phoebe, are completely in love.

Our daughter is called Phoebe Danielle, and we absolutely love her name.

The name Phoebe has withstood the test of time, but it still feels modern. It is feminine but spunky with a great meaning. It is also a blend of my more unique style with my husband’s love for classic names. Phoebe’s middle name, Danielle, is a nod toward my mother, Danita, and we liked honoring her while giving our daughter her own version.

He did suggest Emmett which I like, but I don’t know that either of us is in love with it. Charles, Thomas, and Peter are all family names, but the first two feel too trendy right now and I don’t think I like the repeat of the letter P with Peter. I know I’m being incredibly picky, but are there any baby boy names that strike you as unique but familiar that would be a good match for our sweet Phoebe Danielle?

Let’s start with the tough part: it is possible that you won’t feel the same excitement when you name your son as you did when you named your daughter.

Struggling to name a second (or third or fourth) child is normal. It’s also worth noting that Phoebe Danielle is now the name of your actual, beloved child. Your feelings about the name are all wrapped up with your love for your daughter. So even if you don’t absolutely adore your son’s name on day one, odds are good that you’ll all grow into it together.

That doesn’t mean that his name doesn’t matter – far from it! Follow a process. Reach a good compromise. But know that sometimes a name takes a little longer to feel just right.

That’s why I think you’re on the right track with Emmett.

Let’s look for names in the same general category as Emmett – traditional-ish, but somewhere between the oh-so-common Samuel (ranked #21 in the US in 2018) and the out-there Ike (not in the current US Top 1000).

I actually think Peter might work perfectly. But I can see that Phoebe and Peter locks you into a pattern that might have you pondering Priscilla and Percival for future children. So, moving on.

Boone – It reminds me of Ike from your list. It’s a surname, not often heard as a given name until recently – and yet, the ties to frontiersman Daniel Boone make this name feel slightly traditional. Current US popularity rank: #669.

Calvin – Calvin has been around forever, and Cal is a seriously cool nickname. Plus we’re all about the letter v lately. I think it’s very much in the same category as Emmett, a little cooler than classic Thomas, but a little more familiar than Sterling. Current US popularity rank: #143.

Hugo – I feel like I suggest Hugo all. the. time. lately – but that’s because it hits the right mark. Few of us in the US are using it, but we all recognize the name. Current US popularity rank: #422.

Jesse – Jesse had a good run in the 1980s, the age of Jason and Joshua. But it strikes me as more Biblical classic than dated dad name. Current US popularity rank: #185.

Jonah – If Noah held the #1 spot for years, why not Jonah? It has the same connections to the sea, a similar bright, open sound, and Biblical roots that make it traditional. And yet, it’s not in the same venerable classic category as John and William and James.

Malcolm – We tend to overlook Malcolm, maybe because it’s not easy to pigeon-hole. It’s something of an intellectual name. Or maybe it’s British. But then again, it works well for a cowboy or a baseball player. And it’s impossible to peg to a specific decade. These are strengths, making it very much a brother name for Phoebe. Current US popularity rank: #394.

Simon – Simon strikes me as the smartest kid in the room, and yet I can also think of Simons who have excelled in music and the arts, in sports, politics, and theater. I mean … actor Simon Pegg alone might be reason to enough to consider it. Current US popularity rank: #254.

Thatcher – Promise this is the last surname name! I think Thatcher has a similar vibe to Emmett. But if you like this general category, there are lots of possibilities that are familiar, but not too common, that might be just right for Phoebe’s brother. Current US popularity rank: #814.

Overall, I truly do like Emmett for your family – though I hope you might find a name that makes you both think, “Emmett is good, but we agree this name is better.” I love the sound of Phoebe and Hugo together, and I wonder if that splits the difference exactly, between traditional boys’ names and something a little less expected.

So I’ll put Hugo at the top of my list, but I’m sure readers will have even more amazing suggestions: What would you name a brother for Phoebe Danielle?