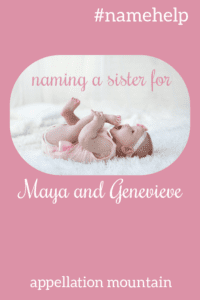 I am expecting a baby girl in October.  She will join two sisters: Maya Charlotte (pronounced My-a) and Genevieve Rose, nickname Evie.

Naming Maya was easy: my husband and I both love the fact that it’s such a multicultural name and is also timeless.

Naming my second daughter was a minefield. My preference was Miriam, after my grandmother. But it is against Jewish custom to re-use the name of a close relative while that person is still alive. No other name seemed right. We initially chose Phoebe, but ultimately settled on Genevieve “Evie.” We use Miriam as her Hebrew name, for cultural celebrations, but it does not appear on her birth certificate. It took a while to get used to it, but it now suits my daughter well and I’m happy with her name.

For this daughter, we would like a name that I love the sound of, and that fits with Maya and Genevieve. Ideally  something classic but also distinctive.  A great nickname would be a bonus for a three syllable name, but not needed for one/two syllable names. I like both long and short names.

In addition to Miriam, our current shortlist (in no particular order) is Margot, Eleanor, Leonora, Tahlia, Clara, Harriet, Ada, Audrey, and Lucinda. I also love Eugenie and Emmanuelle, both of which have family significance, but feel they are maybe a bit unusable/too out there.  I also love Edith but think Edie is too close to Evie.

Quite a few other names we like are ‘off limits’ due to close family members with these names: Naomi, Thea, Estelle, Zoe, Sophie/Sophia, Rebecca, Alice, Lilianne.

We like Ruth or Simone as middle names, or just something that fits well/sounds nice with first name and surname, and sibling names.

Any advice, including preferred options from the list above, additional suggestions and/or suggested first/middle name combinations would be welcome.

It sounds like you know your style. Classic but distinctive. Not too out-there.

The only problem? An awful lot of names fit into that category!

You’ve ruled out Eugenie and Emmanuelle because they’re too different. Lucinda, Leonora, Tahlia, and Harriet also fall outside of the current US Top 1000. On the other hand, Eleanor, Clara, and Audrey all fall within the current Top 100. So maybe they go too far in the other direction?

Miriam could be perfect, except it sounds like it’s already in use by your middle daughter – if not daily, then at least on some occasions of significance.

Both seem like equally good options. I’d give a slight edge to Margot, as I think it hits the vintage-cred, modern-vibe sweet spot perfectly.

If not Ada or Margot, how about:

Colette – Everyone knows this name, but it’s surprisingly rare, currently ranked #533. It reminds me of Emmanuelle and Eugenie, with that same French appeal. But I think it’s very accessible.

Daphne – I almost didn’t suggest Daphne, because it seems awfully close to Phoebe. And yet, it has potential, falling somewhere between short and sweet Maya and the more elaborate Genevieve. At #383, it’s familiar but not common – and nothing else sounds quite like Daphne.

Eliza – If Eleanor is close-but-not-quite, could Eliza be the right choice? While evergreen Elizabeth remains a Top 20 staple, Eliza stands at #131 – popular, but not a chart-topper.

Juliette/Juliet – The -ette ending is more popular than the more familiar -et, but neither makes the current Top 100. (They’re at #185 and #242, respectively.) It’s a more mainstream alternative to Harriet. And Jules is a fun short form.

Lucia/Louisa – I wonder if any of the Lou/Lu names might appeal to you? I can imagine Maya and Evie with a sister called Lou, Lulu, or Lucy. Lucinda is on your list, but maybe something with similar sounds, but a tiny bit shorter and more familiar might work?

Vera – I tend to suggest Vera as an alternative to Cora. Just as distinctive a sound, every bit as rich a history and meaning … and yet, it’s at #257, nicely outside of the most popular names.

Willa – Like Vera, Willa makes a logical substitute for Emma and Ella and other favorites. At #384, it’s known, but seldom heard.

I think any of these fit beautifully with your older girls’ names. I think Daphne and Colette are my favorites, as they sound distinctive and different without being too out-there.

And yet, I want to look at a few from your list again. My only hesitation with Margot is that you’ll repeat an initial. I tell parents to overlook things like that all the time, and yet … how do you feel about it? Maya and Margot share a lot of sound.

Likewise, I rejected Harriet as too rare. But that’s in terms of use. It’s the kind of name that everyone knows, even if no one uses. And Maya, Evie, and Hattie are daring; Maya, Genevieve, and Harriet sound great together, too.

Though I want to come back to one more name. You’d mentioned Simone as a middle. Is it to honor a loved one? Or is it something you’d consider as a given name? Because Maya, Evie, and Simone might be my favorite of all. It’s French, like Genevieve; but a little bit on the shorter side, like Maya. It’s familiar, but not too common. And I think distinctive describes the name well. Based on last year’s data, Simone ranks #733 – a name we all know, but no one is using.

Readers, what do you think? I’m tempted by Margot, Harriet, and Simone, as well as Daphne and Colette. But there are probably dozens of great suggestions I haven’t considered!