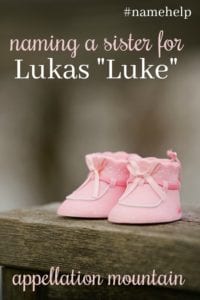 We are expecting a baby girl to join our toddler, Luke. Naming Luke was easy. Luke has always been my favorite boy name, as it is pronounceable and I thought it was unique, having never known a Luke.

While I like having a unique name in ‘Linnea,’ people pronounce it wrong more often than not. And even though my husband Rob and I found that Luke is now popular, we decided to stick with it. Rob wanted Lucas on the birth certificate, and I agreed so long as it was Lukas, wanting consistency with the ‘K’ as the plan was to call him Luke.

For our girl’s name, we are less decided. My favorites for many years are:

Names that Rob has suggested include:

We believe that we will ultimately land on Romy, but would love to hear suggestions of Romy-like names that we are not thinking of!

And we are wondering how you and your readers feel about Romy vs. Rosemary (Romy)? With Romy as a given name, our daughter’s life could be made easier, but Rosemary could also open future name doors for her. We’ve ruled out Romilly, Romona, Rosamund, etc.

Many thanks in advance, and I truly appreciate any thought that you and your readers are willing to give our name!

I love Luke and Romy together. Since Luke is really Lukas, it’s extra-tempting to choose a formal name for Romy. And I agree with Rob – Rosemary is my personal favorite, too. I think it’s both sweetly vintage and timeless at once; a strong name with ties to the natural world, but also traditional in style.

A formal name will give your daughter options; and it will grow and change with her. (For more on reasons to embrace nickname-rich names, see this post.)

In other words? I’d choose Rosemary.

But others see it differently, and they raise good points. Life might be more straightforward when the name on your birth certificate matches the name you use in everyday life. And if you’re not wild about Rosemary, then it might make sense to skip the formal name.

So if there’s no right answer, how do you decide?

Shortening Lukas to Luke is easy and obvious; but Rosemary called Romy might surprise some people. I’d guess the default nickname for Rosemary is probably Rosie or Rose. Will you mind correcting those who assume incorrectly, and even explaining the nickname, from time to time?

Does it bother you when others get your son’s name wrong? Unusual names and less common nicknames are great, but they do require a little more patience.

I also wonder how important it is to honor your mother. Does Lukas have a family middle? If so, it might be even more important to use Helena for your daughter’s middle – or even first. If that’s the case, it might change the names you consider, too.

Let’s have a poll about Rosemary or Romy, because sometimes it’s helpful to see how others react.

Theodora, called Thora, Thea, or Tess – The easiest option would be Theodora called Thea; it’s reasonably expected. They’re both names with ancient roots, very much at home in the modern world.

Helena, called Nell, Lena or Laney – Helena has multiple possible pronunciations, and that can be a little bit of a headache. But Helena also has some great built-in nicknames. I’m partial to Laney, but it really depends on how you’re pronouncing the name.

Eleni – Is reinventing Helena an option? There are lots of Helen names that might appeal. I think Eleni works especially well with Luke.

Esme – Or maybe you’d prefer to sidestep the formal name? In that case, I’d suggest Esme. More mainstream than Calliope; not as wildly common as Sara.

Vera – Might Vera be an alternative to Clara? It’s similar, but not quite as popular. Plus, it’s got two great meanings – faith, as well as truth.

Georgia – I feel like Georgia should be the perfect compromise name. It’s traditional but not too buttoned-down, familiar without being common. It might shorten to something like Georgie or Gigi, but it doesn’t need a nickname at all.

To be honest, I can’t find anything I like better than Romy. And yet, there are dozens of names that I do think work well with Lukas “Luke.”

Readers, what would you suggest for a sister for Lukas “Luke”?