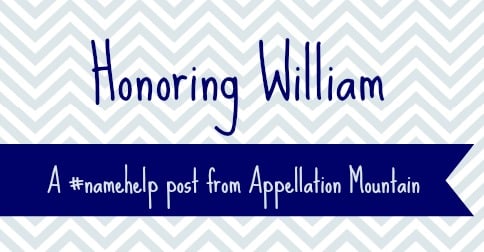 Name Help is a series at Appellation Mountain. Every Saturday, one reader’s name questions will be discussed. (Wait, you say, it’s Monday! Right you are. We’ve had so many requests that I’m adding these posts to Mondays as needed.)

We have an almost 5 year old named Layla Capri. Layla was a name I had chosen back in middle school and my husband loved, so it was a no-brainer. Capri came unexpectedly during the pregnancy. Layla would always kick my belly when I would play the song “Capri” by Colbie Caillat, so we like to say that she picked her own middle name.

We are expecting baby #2 in May. My husband and I have decided we would like to honor my dad, William, this time around.

We both love Willa for a girl and Liam for a boy. However, I have a couple of concerns:

My dad’s middle name is Lee, which he gave to my brother as a middle, and my brother has now passed down to my nephew as a middle. So, that name already has plenty of use.

Our last name is two syllables, and starts and ends with N. (Think Nelson.) So we are also trying to avoid names that begin or end in n.

Less important, but also worth noting, my husband, Scott, Layla, and I all have 5 letters in our first name. It would be fun to have another 5 letter first name to round us out, but not a deal breaker by any means.

Read on for my reply, and please leave your helpful thoughts and suggestions in the comments. 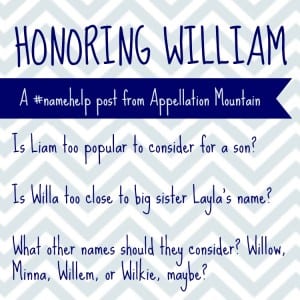 It sounds like you’ve made a great start on choosing names. By deciding to honor your father, you’ve narrowed the list of potential baby names from a galaxy of thousands to a very few. But if honoring William is more important than any other consideration, that’s as it should be.

My sense is that honor names – when they’re freely chosen by both parents – are rarely regretted. That’s true even if the name isn’t exactly perfect in every sense. We named our son Alexander after his paternal grandfather back in 2004. It was very popular then, and it has become even more popular since. But I do genuinely like the name, and I love the connection between generations. I’ve never regretted naming my son Alexander, even though my tastes definitely run towards the less common.

It’s a consistent theme I’ve heard from other parents – an imperfect name choice rich with meaning trumps a name that is super-stylish but chosen for that reason alone.

So, that brings us to your first question: is Willa too close to Layla?

I don’t think so. In How Close is Too Close? I listed ten factors to consider, and sharing sounds is one of them. But I’ve met plenty of families with more than one a-ending name. The first syllables are very different. And the names don’t actually rhyme, share the same meaning or origin, or set off any other too-close signals. I say they’re fine together.

Let’s have a poll, because I’m curious to see if I’m in the minority here:

So I do think you’re in good shape if your second child is a girl. Layla Capri and Willa Mercy. The sounds are similar and the styles are different, but both names have a story and strong reasons for being chosen. In that sense, they’re perfectly matched.

Now, on to an equally complicated question if this baby is a boy: is Liam too popular?

I do think my comments from above apply – better to choose a name that’s very popular, but meaning rich, rather than one that’s less common, but chosen without the same kind of backstory.

There are lots of good reasons to use a Top Ten – or even a #1! – name, and I’d say that Liam checks off a lot of boxes on the list.

When I look at the Top Ten names, it always strikes me that we don’t really know that many kids with any of the names. There’s only one Ava in my kids’ entire school, plus one other in our extended circle of friends. There’s more than one Olivia, Sophia, and Isabella, but I don’t believe any class has more than one. William and James repeat, of course. But there’s only one Liam.

Again, I think a poll might be helpful here:

Now, if you did want to consider alternative names that honor William but aren’t in the US Top Ten, you might think about:

After looking at all of the options, I can honestly say that I’d stick with Willa and Liam – but I know that there will be more great suggestions and creative ideas from the community.

Readers, what would you say to Erica and her husband? Are Layla and Willa too close? Is Liam too popular? Are there other William-inspired names that might work?