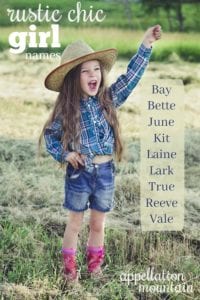 We have a birth announcement: welcome to the world, Wells Patricia!

I emailed you back when I was pregnant with my second, and loved your suggestions and the readers’ responses.

I am in search of a name for my third.

I currently have a Hutch Gerard (named after the grandfathers) and Scout Olinda (named after my grandmother).

We have a boys name already for #3, but are in search of a girl’s name. Her middle name will be Patricia.

We, again, are looking for a unique, one syllable name to fit our cowgirl boot-wearing little pistol (if she is like her sister).

I like names such as Blythe, Hearth, Lux, and Cross. But my husband is not a fan of any.

Any suggestions would be great! Thanks.

I went back and read the original post from 2016, when you were expecting Scout. The challenge, of course, is that you’ve probably ruled out so many of the great names we discussed for a daughter back then. Either they didn’t strike you as The Name, or maybe your husband didn’t embrace them.

Either way, we have to start fresh. And that’s tough, because I love so many of your favorites – and lots of the names that I suggested the last time, too!

We’re looking for a one-syllable name for a girl, one that feels “rustic chic” – spunky, Western, unexpected, and stylish.

Your list spans a few styles. There’s vintage Blythe, modern meaningful Lux, and borrowed from the dictionary Hearth and Cross. So let’s see if we can find some suggestions that cover those categories, and more.

Bay – A nature name, thanks to the body of water, Bay is also a color name – as in a common color for horses’ coats. I think the sound is bold and distinctive enough to stand up to siblings named Hutch and Scout. A bonus? It’s been used as a girls’ name on the ABC Family series Switched at Birth, so as with Scout, it’s slightly familiar as a girl’s given name. Read more about Bay here.

Bette – I know, I know – Bette Davis pronounced her name like Betty. But I’m rhyming Bette with jet, and I don’t think you’d have any trouble convincing others to do the same. Bette reminds me of Blythe, but feels a little more mainstream. I doubt many of us have met a Bette, but it links the name to the evergreen Elizabeth. One more reason to love this name? Bette makes me think of making a bet, which lends this name some serious swagger. Perfect for a cowgirl!

June – At first glance, June seems way too vanilla for your bold and daring naming style! And yet, how can we forget June Carter Cash? That makes this name feel right at home on the range, a vintage choice more common than Blythe, but still comfortable with Hutch and Scout. It also tends to be associated with adventurous characters, like Junie B. Jones of kid lit fame. Read more about June here.

Kit – I almost dropped Kit from the list because it shares sounds with Scout. And yet, Kit is kind of perfect. It feels spirited and independent. Kit Carson takes the name to the American frontier; he was born Christopher, but Kit can also be short for Katherine or Christina. And the American Girls character? Kit Kittredge gets her nickname from her surname. She’s actually Margaret Mildred.

Laine/Lane – Lane came up in the comments last time, so I wonder if you considered it for a daughter? I’m partial to Laine for girls, though neither makes the current US Top 1000. (Lane appears on the boys’ side only.) It reads country-cool, a short name with a big sound.

Lark – Larks reminds me of Lux, but I also like the symbolism: you can be “as happy as a lark.” Like Hutch and Scout, it’s a word name – but not necessarily a word that comes up often in everyday speech. Bird names are having a moment, which would help Lark fit right in, but it’s still a stand-out choice. Read more about Lark here.

True – Okay, yes, a Kardashian did just use this name. But that shouldn’t rule it out for everyone else! It’s a great sound, and a universal virtue. To be true is to be loyal and steadfast – all good qualities. Read more about True here.

Reeve – There’s a strong literary link to Scout, thanks to To Kill a Mockingbird. But there’s a subtle literary tie for Reeve, too. Reeve Morrow Lindbergh was the daughter of aviator Charles and author Anne; like her mother, she’s a writer. The sound is sharp, combining Reese and Eve for a name that’s just feminine enough. As for meaning? Reeve comes from an Old English word for a sheriff.

Vale – I promised I wouldn’t repeat names from my earlier list, but I can’t resist just one. Does Vale hold any appeal? Since it’s from an archaic word for valley, I think it holds just the right amount of outdoorsy appeal. The sound is different, but brings to mind conventional choices like Valerie and Gale. I think Hutch Gerard, Scout Olinda, and Vale Patricia sound exactly right together. Read more about Vale here.

Overall, I like so many names in this category that I’m having a tough time choosing a favorite! Vale appeals, but then again, so does Bette. I particularly like the fact that Bette works on two levels – an unexpected vintage girl’s name, as well as a daring word choice.

Readers, I can’t wait to hear your thoughts on this one! What would you name a sister for Hutch and Scout?