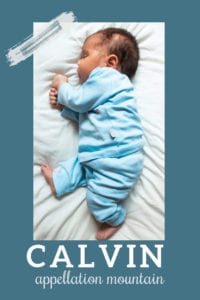 The baby name Calvin has gone from theologian’s surname to the pop culture staple to rising favorite for our sons.

That’s where Jehan Cauvin was born, circa 1509.

Thanks to his father’s efforts and some good fortune, Jehan studied Latin and Greek, philosophy and law. By the 1530s, he’d left the Catholic faith of his childhood, becoming a reform-minded pastor and theologian.

We remember him as John Calvin, one of the most broadly influential leaders of the Protestant Reformation.

As for his surname, it comes from the French word chauve – bald, from the Latin calvus. Calvus had some history in the ancient world. The poet Gaius Licinius Macer Calvus wrote way back in the first century BC.

But it wasn’t until the fame of John Calvin spread that the surname was regularly heard as a first.

The name peaked in popularity in the US in the year 1924.

That coincides with the election of Calvin Coolidge, thirtieth President of the United States.

Fun fact: Coolidge was born John Calvin Coolidge, Jr. He’s (at least) the fourth generation of Coolidge men named Calvin, and was always known by his middle. It’s generally considered a nod to the theologian, as the future president grew up in a Congregational church, one of the offshoots of Calvinist beliefs.

It transitioned from surname with religious overtones to mainstream choice in the years that followed.

One of the many Calvins from those ordinary-name years? Calvin Klein, born in 1942. Among other things, Klein gets credit for sparking the designer denim trend in the mid-70s. Those jeans were called “Calvins,” lending a very different vibe to the name.

Born in 1960, baseball legend Cal Ripken is also a Calvin – Calvin Edward Ripken Jr. He played 21 seasons for the Baltimore Orioles, and was elected to the Baseball Hall of Fame as soon as he was eligible. His dad, Cal Sr., also played for the Orioles. Once again, the name transforms, this time to something rather sporty.

Of course, if you’re old enough to have children, the baby name Calvin might make you think of a fictional character.

Comic strip creator Bill Watterson chose his hero’s name – and that of the boy’s stuffed tiger companion, Hobbes – to reflect the two philosophical points of view implied by the names. It’s whimsical and brainy at the same time.

If the 100-year rule applies, then a name popular in the 1920s ought to be back in favor today.

It holds true for names like Leo and Charlie. And, increasingly, it’s true for the baby name Calvin, too.

With so many middle-v names in favor, from Oliver to Everett, the baby name Calvin fits right in. It’s not quite as classic as Charles, but it’s not nearly as novel as Maverick.

Casual-cool nickname Cal is a bonus. And the name’s many touchstones – from sports to fashion to American history – make it surprisingly versatile, too.

For parents after something traditional-ish and slightly vintage, but not as buttoned-up as James or Henry, Calvin might be the perfect alternative.

What do you think of the baby name Calvin? Would you consider it for a son?

First published on October 10, 2008, this post was substantially revised and re-published on January 26, 2021. 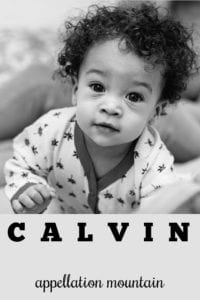