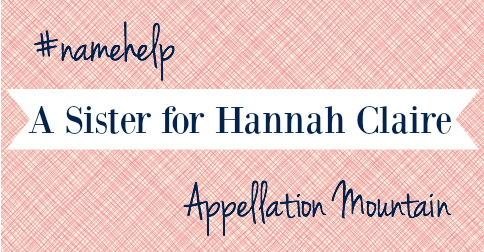 Name Help is a series at Appellation Mountain. Every Saturday – and some Mondays! – one reader’s name questions will be discussed.

We are expecting our second child, another girl.

She is due July 7th and my husband, Justin, and I are having trouble this time coming up with a name we both agree on.

With our first, we knew immediately she would be Hannah Claire as soon as they said, it’s a girl!

My husband and I have tossed around tons of names:

Any help and suggestions you can provide, so this baby girl has a beautiful name that sounds good for a child and adult, would be most appreciated.

Thank you for your help! 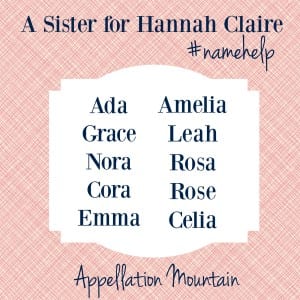 If you told me that you were looking for a palindrome name that meant grace, had exactly two syllables, did not end in the ‘ee’ sound, and was traditional, but not trendy, I might have said “Nope, can’t be done.” Because that’s a lonnnnggggg list!

So let’s dive in, and try to find some names:

Ada – When I was a child, someone gave me this book. Yup, Hannah is a Palindrome. I’m pretty sure Otto was another character in the book. I’ve been keeping an ear out for palindrome names ever since, and honestly? There aren’t many that are mainstream. But two that work as a sister for Hannah are Ava and Ada. I think Ada matches better with Hannah, and it’s not super-popular. (#382 in 2014.)

Grace – It’s a little obvious, I suppose. If you’re hoping for a big family, having daughters named Hannah and Grace might leave a third daughter feeling left out. And it doesn’t have the ending sound you were hoping for. I suppose if you said it five times fast, Grace Smith sounds a little bit like Gray Smith. But despite all of those shortcomings, I think it’s worth considering. It is a traditional, not trendy possibility that feels just right with Hannah.

Emma – Yes, it’s been a #1 name for girls in the US in recent years. But Emma isn’t trendy. It’s a timeless name that happens to be (very) popular right about now. I’ve come across other pairs of sisters named Hannah and Emma, though, and I think they work well as sister names. Plus, Emma Jane works well together – probably better than Ada Jane, with the repeating long ‘a’ sounds. (Though that’s a matter of personal preference, not a rule!)

Nora – If not Ada or Emma, what about Nora? It has the same traditional feel as Hannah, but doesn’t sound too similar. If not Nora, maybe Cora? Amelia – Amelia is a vintage choice for a daughter, quickly climbing the popularity charts today. But why not? It brings to mind daring aviatrix Amelia Earhart, and has centuries of history behind it. (That’s the famous Miss Earhart as a child.) It’s three syllables, not two – but I think it’s worth consideration, if only because Hannah Claire and Amelia Jane sound so much like sisters.

Leah – I know a Leah in her late 20s, and another in first grade. It’s another Old Testament name, which is probably why they sound so right together. Bonus? If you decided you wanted to stick with Old Testament names for future children, there are tons of possibilities.

Rosa, Rose – I’m tempted to suggest Rose, except it has the same potential pitfalls as Grace – Rose Smith, and it rules out using Jane as a middle. But Rosa might work wonderfully well. The reason I went look for a rose name (of which there are dozens!) is because in the language of flowers, a pink rose symbolizes grace. Modern florists tend to simplify this to friendship or appreciation instead, but the Victorians had far more complex ideas about meanings. Another floral name that I would love to suggest is Lily, but I suspect the ‘ee’ ending rules this one out.

Celia – If Amelia feels close, but not quite, maybe you would consider Celia? It’s two syllables, works beautifully with Jane, ends in the right sound, and has an appealing meaning. It comes from the Latin caelum – heaven, via a Roman family name. And Shakespeare used Celia in As You Like It, so that might appeal, too.

Sometimes I have a hard time coming up with alternatives. In this case, I feel like I could go on forever! But that’s not helpful, so I’ll stop here. My favorites is Nora Jane – though it’s not a palindrome, and the meaning isn’t there, either. I think Ada is a great palindrome possibility, and I also like Celia quite a bit.

Readers, what would you suggest to Mallory as a sister for Hannah Claire?