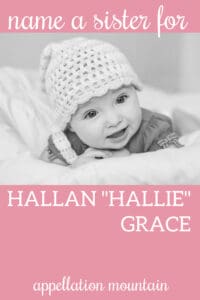 We have a daughter named Hallan Grace, who we mostly call Hallie. Her name comes from my dad, who was Harvey Allen, but always went by his middle name – H. Allen. Changing the spelling to Hallan was a very eleventh hour decision, but we think it looks prettier this way. My mom’s mom was Grace, so her name is all from my family.

If we have a boy, we’ll name him James after my husband’s dad, with possible middle names Anthony or Ellis, both from his mom’s side.

But we’re having a girl this time. We always imagined having three or four children, so I think we don’t want to use a J name or anything like Ellison/Allison for this daughter.

For lots of reasons, we also don’t want to use a family name this time.

We’ve been going in circles, though, about what we do want to name her! We like names like Mila, Ava, and Nora, but they seem too plain next to Hallan. I kind of like the idea of Harper or Harlow, but I’d want a nickname. My nieces/goddaughters are Riley, Addison, Evelyn, Bella, and Sadie, so those are all off-limits.

We’ve been putting off this conversation, but my due date is January 18th, and Hallie was a week early, so time is getting very short! Any ideas would be great!

This is a dilemma, isn’t it?

If you wanted to use family names for every child, then the obvious name is there: Ellis/Ellison called Ellie. It’s a little close to Hallie, but since they’re both nicknames for very different given names, I think it would work.

But you very much want to avoid that, so Ellis/Ellison is off the table.

Still, I wonder if we should be looking for names in that general style: gender neutral, surname-style first, with a sparky, throwback nickname for everyday use? Names like Madison “Maddie” and Emerson “Emmie” succeed because they offer the best of both worlds – just like Hallan “Hallie.” If you love your daughter’s name, sticking with this style feels right.

But first, a question:

Should we consider H names?

It sounds like you’ve seriously considered Harper and Harlow, but worry about the lack of nickname.

The challenge, of course, is that contenders like Hollis-called-Holly are just too, too close to Hallie.

Hadley seems like the strongest candidate to me, and yet, I’m not sure it works.

So none of them feel like a home run! Let’s keep looking, moving away from the letter H.

A SISTER for HALLAN “HALLIE” GRACE

There’s Cameron, too, of course, but because Hallan is rare, I’m inclined to suggest something like Camber or Cambry, equally distinctive choices.

Cassidy has plenty of history, and briefly spiked in use in the late 1990s/early 2000s. But it never quite caught on, and it’s seldom heard today. Hallie and Cassie are great together!

Delaney is rising in use, a current favorite among surname names for girls. But it’s still great, and Laney is a fantastic sister name for Hallie. Lanier is a French surname for someone who worked with wool; Lainier is another spelling. Pronunciation gives me pause. In French it’s more like lahn yeh; Americans tend to say it like lah NEER, rhymes with veneer. Still, I think it’s a possibility.

Any Ev name could be great, but I’ll stick with straight-up word name Ever.

While Juniper is more nature name than surname, I think it sounds right with Hallan.

I can see why Harlow isn’t quite right, but would you consider Marlowe? For reasons I can’t explain, the most popular spelling is with the E, but Marlow and Marlo are equally valid options. I think Marley and Hallie work as nicknames. You might also use Lola or even Mari.

Maguire might be less name-like than some of the choices on this list, but when shortened to Maggie, it works.

If Harlow and Marlowe are up for consideration, Winslow could be too – especially with sparky, vintage nickname Winnie.

Overall, I think my favorite is Delaney called Laney. It’s more mainstream than Hallan, but I don’t think that’s a problem. And it leaves lots of room for naming future children – whether that’s a son named James, or a daughter with another surname-style choice.

Readers, over to you! What would you name a sister for Hallan “Hallie” Grace?