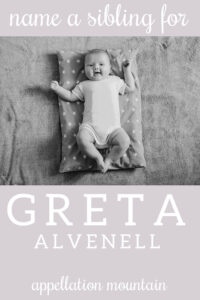 We are expecting our second child in early January and I keep feeling like none of the options we like as standalone names quite fit with a sibset.

Our first child is Greta Alvenell and I honestly love so much about her name. I love that Greta is feminine without frills, easily recognized without being popular, has a straightforward spelling and pronunciation, and also that it doesn’t lend easily to nicknames.

The middle is our loose, creative homage to my grandfather Alvin.

This baby is a surprise so we need boy and girl options.

Names we both agree on but are definitely not exclusively looking at include:

For a middle something also based on a family name would be nice: Espey, Jean/Gene, Kay, Jon, Elizabeth or Katherine.

Would greatly appreciate any and all suggestions – thank you!

Congratulations on your second!

Greta Alvenell is absolutely gorgeous. And as an honor name for Alvin, it’s just perfect. Are you sure you need help?!

Because often it’s when we’ve gotten it just exactly right for our firstborn that naming her sibling feels impossible.

Two things leap out at me.

First, your list feels far more rare, and maybe even a little more daring. Greta feels like a neglected classic, a name that we all know – even if few of us are choosing it for our children. It’s a reliable Top 1000 choice. This time, though, only one of the girls’ names  and one of the boys’ appear names in the current US Top 1000. (Though that’s not the only – or even the best – measure of familiarity.) Amos and Flora would be great choices, but I’m not sure if I’d automatically make them the frontrunners.

Second, nickname-proof/easily spelled-pronounced is challenging, and some of these fall a little short. I’d say Duncan, Agnes, and Flora are the names that don’t lend themselves to an automatic/obvious nickname, though even Agnes is often Aggie. More on that below!

A BROTHER FOR GRETA ALVENELL

A handsome, traditional choice that has the same sort of vaguely European vibe as Greta.

A short name with a strong sound, Curt could be spelled with a K. So that’s a negative. But Curt – or even Curtis – is one of those names we all know, but seldom hear.

Often considered a nickname for Dashiell, Dash ranks in the US Top 1000 – while Dashiell does not. That makes Dash a name with lots of twenty-first century energy, but a feeling that it’s not completely novel.

A nature name, Heath saw some use in the 1960s and 70s, thanks to a popular television character. It’s remained familiar, thanks to figures like the late Heath Ledger.

Are surname names on your radar at all? I like the style of something like Thatcher with Greta. It’s strong, distinctive, and yet familiar, too.

I’m not sure any of these top Duncan, but I really do like the sound of Greta and Conrad.

A SISTER FOR GRETA ALVENELL

Since Beatrice is more popular than Beatrix, I suspect that could be a hassle. Likewise, Marlo will probably be mistaken for the more popular Marlowe.

Aster feels maybe a little out there.

And I’ve yet to meet a Tabitha who wasn’t Tab/Tabby at least some of the time.

That leaves Agnes and Flora. Both are great! Flora is more familiar, though, so I’d put it at the top of my list.

Greta and Flora could be perfect together.

Let’s see if anything else clicks.

With several possible meanings and origins, Alma is a distinctive name that really only has one spelling and pronunciation.

I do love Marlo’s O-ending, which got me thinking about other options. Margot is too popular; that’s even more true for Willow! While there are lots of options, Cleo feels like the best fit with your list.

A brief name with bold style, Faye might be spelled Fay or Fae, but the four-letter version is the most common, by far.

A homespun name that mixes traditional vibes with plenty of warmth, Martha is another one of those names everybody knows, but nobody chooses.

Since Aster is a word name, would you consider a vintage gemstone name, like Opal?

A cousin to Sylvester and Silas, this French form of Sylvia has caught on in the US in recent years.

I love the sound of Greta and Sylvie best of all, but it’s easy to imagine any of these working beautifully for your family.

Maybe Sylvie Jonquil, to play off family name Jon? Or Flora Aspen, since Espey refers to aspen trees in German. (I think! Surnames can be tricky, and if your family is Scottish, it could be something else entirely.) I like Duncan Espey an awful lot, too.

Readers, over to you – what would you name a sibling for Greta Alvenell?