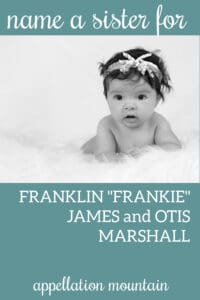 We have two boys. Franklin “Frankie” James is 7 and Otis Marshall is 3. Our third and last child will be here around Thanksgiving.

I feel like we’ve worked out our boy style pretty well. Down-to-earth names that look right on the name patch of a mechanic’s shirt. But creative, too. Not too weird, not too ordinary.

If this baby was a boy, we were considering Milo, Oscar, and Dean.

But we’re having a girl, and I can’t figure out what goes with our boys’ names.

We don’t want a name that sounds like we’re mad about having a girl, if that makes sense. So no Charlie or Stevie, even though I like them on other peoples’ kids.

Names like Sienna, Alyssa, and Olivia aren’t for us, either.

Some names that we liked when Frankie was born are now taken by friends. (Not that we couldn’t use them if we really loved them, but none of them are that good, at least not to me.)

So far that list is Alice, Luna, Eloise, and Josie, but I have two friends who are also due with girls around the same time, so that worries me, too!

The way you describe your boys’ names is so vivid. I love it! I used to walk past this old garage turned brew pub on my way to the library, and it feels like that’s your style – retro, but with updates.

So what’s the equivalent of a name patch on a mechanic’s coveralls?

We need a name that’s vintage, but slightly unexpected. It has to feel creative and established, too.

Because you already know a lot of kids, it almost certainly can’t rank in the current Top 100, either.

And we’re avoiding anything too boyish.

What would you think of …

A SISTER FOR FRANKIE and OTIS

Elizabeth is an evergreen classic, but no one is naming their daughters just Betty anymore. Which is crazy, because in the 1920s and 30s, it was the second most popular given name for girls in the US, behind only Mary. I love the idea of Bernadette “Betty” as a sister for Frankie and Otis.

It’s the most popular name on this list, sitting just outside the current US Top 100. And maybe it’s a little more late nineteenth than midcentury. But I think Daisy works as a sister for Frankie and Otis.

Okay, Carla is famous as the name of Rhea Perlman’s character on long-running sitcom Cheers, which is probably why this name came to mind. Or maybe it’s because I think Carlotta is a great alternative to mega-popular Charlotte. Oh, and because it offers up the nickname Carly (or Lottie for Carlotta) that are Charlie-like, but clearly feminine.

Maybe it’s the whole Spider-Man/Gwen Stacy vibe, but I think Gwen sounds like a sparky sidekick for Frankie and Otis. The character’s full name is Gwendolyne Maxine Stacy. (I probably would’ve added Maxine to the list except for the Charlie/Stevie thing.) Gwendolyn is actually the most common spelling of the long version of the name, but just Gwen has long been given independently, too.

In French, John is Jean. Which makes Jeanne the equivalent of Jane. That’s about as classic as it gets. But it’s all sorts of throwback, too, isn’t it? And Jeannie is darling. It’s instantly familiar and very, very rare.

Strictly speaking, Lula is a nickname for Louise. But it’s not really used that way now. Instead, Lula feels like a Luna-meets-Lola kind of name, the best of both, but far less common.

I’m convinced Martha is about to make a comeback. It’s long read Martha Washington, all eighteenth century antique. But hey, this is the age of Hamilton! Lately Martha feels more like a fresh update for Hannah, a down-to-earth name with a capable vibe.

Or maybe Rose-called-Rosie? It’s the ultimate name on a work shirt for a woman, thanks to the World War II icon Rosie the Riveter. But it also works because Rose is a vintage favorite that mixes elegance and strength.

This Sarah nickname hasn’t ranked in the US Top 1000 since 2004. In the nineteenth century, Sallie was the more popular spelling, and that might actually appeal more in our age of Ellie and Millie and Sadie. But either way, it’s a traditional favorite for a daughter with plenty of spirit.

While Gertrude seems stuck in style limbo, Trudy fits right in with Ruby and Lucy.

A name that mean either faith or truth, Vera is a brief, traditional choice that feels at-home in nearly any decade.

I think my favorites are Lula, Jeanne, Sallie, and Betty – all names that feel conventional, but unexpected by 2022 standards.

That’s not to say that Daisy or Gwen – or Alice or Josie – wouldn’t be great. It’s just that to get the same sort of feel as your boys’ names, I think a girl’s name has to be even less common. So that’s why I’m veering towards the truly underused, as opposed to the just not-too-popular.

Readers, over to you – what would you name a sister for Franklin “Frankie” James and Otis Marshall?