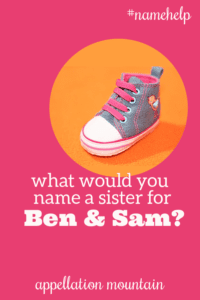 We have two boys, and are expecting our third child in August. I was sure it would be another boy, but surprise – it’s a girl!

For a son, we liked Max, but weren’t sure about a longer name. Our sons are Benjamin Hunter and Samuel Emerson. Both middles are family names.

The girl name we planned for years was Kate, short for Katherine. Except our favorite babysitter is Kaitlyn, and we know lots of other girls with Kate/Kay names. I’ve thought about other traditional names, like Elizabeth and Margaret, but I don’t like that they have lots of possible nicknames. Not that I mind the idea of my kid using something else someday, but I like that everyone assumes – correctly! – that Benjamin is Ben and Samuel is Sam.

We don’t have any really great family middles left for baby three. For a boy, our list was Perez, Davis, Brown, Walter, Adam, James, and Scott, but none of them are as obvious/meaningful as the ones we used for our first two children. For a girl, we might use some of these. I love the idea of using my mom’s name, but it’s a very 50s/60s name, as are the names of my mother-in-law and lots of other important women in our lives. One possibility is Irene, my grandmother’s name, but maybe that’s too old-fashioned?

Another thing that bothers me: the kids all have my husband’s surname, which is a common, two-syllable, starts-with-C, ends-with-r name. It never bothered me that there could be other boys called Ben C—–r or Sam C—-r, but with a girl, it’s on my mind a little more.

My mom suggested Mae/May and I love it, but it’s possible we’ll have another baby (or even two) after this, so I don’t want to use a name that means we couldn’t possibly use Max in the future. And I’m not sure I want something that short as her actual name, even though we do like shorter nicknames.

I’m not sure if repeating an initial is a deal-breaker, but I’ve ruled out Beatrice because it seems close to Ben.

Time is running out, and nothing seems right. Where do we start?

Years ago, when my mom was expecting her fourth child, I remember her being sure it was another girl. But nope – boy! After three daughters, the only names circled in the baby name book were girl names. My parents had worked out a consistent style for naming girls, but boys … it was as if they were starting from scratch.

It sounds like that’s your position. You can name another son pretty easily, because you’ve been working though your list and agree broadly on a general style.

This suggests that your girl naming style or strategy might be a little different than your approach to naming boys. So rather than applying the same rules you’re using for a naming a son, let’s see if we can start fresh with a list of girl names that might be just the tiniest bit different.

The one rule I’m going to apply is that any nickname suggested has to be pretty obvious and automatic – the equivalent of Samuel/Sam.

Anna – How can it be that classic Anna feels relatively rare – despite appearing in the US Top 100? I rarely hear Anna shortened, but Annie is the obvious – perhaps the only – practical nickname option. Or would you ever consider naming her Anna Katherine and calling her Anna Kate? Just a thought …

Clara – Clara also appears just beyond the current US Top 100, but then, Ben and Sam are in the Top 25. I think Clara makes a perfect sister name for your boys. It’s classic, but has a cool factor. Everyone recognizes it, but it’s clearly a name that belongs to this generation. (Or, you know, the late nineteenth century. Same thing, kind of.)

Leah – Ben and Sam both come from the Bible, though it’s not the first thing that comes to mind when I hear the names. Similarly, Leah is drawn straight out of the Old Testament. But somehow, all three names feel brisk and modern, not ancient.

Lucy – The name that immediately came to mind was Lucy. It might be short for Lucille or Lucia or Lucinda, but I like Lucy on its own with Ben and Sam. A perfect example of how a name might not exactly fit the pattern, but can still feel exactly right. If Lucy is close, but not quite the right name, there’s also Mary, Ruby, Molly, Lily, Ivy, or Daisy.

Jane – Or maybe a slim, trim, single-syllable girl name would suit? I love Jane with Ben and Sam. It’s crisp, clearly feminine and sounds just a little bit different while still fitting right in. Or maybe Grace or Claire?

Mabel – You mentioned Mae, so I wonder if Mabel is worth considering? It’s darling on a child, and it’s easy to imagine on an adult. But would another M name rule out using Max in the future? I think Max and Mabel could easily be siblings …

Rose – Or any of the Rose names: Rosalie, Rosemary, Rosanna, maybe? The advantage of Rose is that it shortens (well, lengthens really!) to Rosie, and it’s tough to imagine another nickname catching on.

Tessa – Ben, Sam, and Tess are practically perfect together, and Tessa is just enough formal name. Strictly speaking, Tess and company came from Theresa. But today, Tessa feels right at home on a child, while Theresa fees dated.

Overall, my favorite is Lucy, followed by Rose. Neither follows your rules perfectly, but I think they may fit Ben and Sam exactly right.

As for middles, I think lots of these work well – Davis, Perez, and Brown, certainly – but maybe James and Scott, too, depending on the exact combination. I love Lucy Davis LastName best of all.

Readers, over to you – what would you name a sister for Ben and Sam? 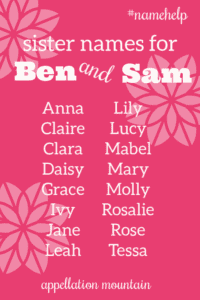