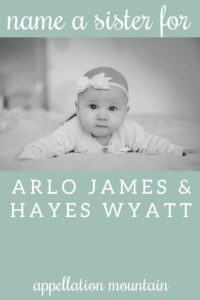 We have two boys, Arlo James and Hayes Wyatt. Boy names are easy for us, and we sort of assumed that this would be another boy. Our top choice was Beckett, probably with the middle name Cameron.

To be honest, I’m sort of surprised that we’re having a girl! My husband is one of four boys and I have two younger brothers, so I’m very into being a boy mom. We’ve never really talked about girl names. The ones my husband has suggested so far – Emma and Bella – are names that I’ve heard a lot. Or things like Olivia, just too fussy for me.

So I guess we want:

Our last name is very Irish – M@c plus C@arthy. But we don’t feel especially Irish, and we’ve tried to avoid the most Irish-y names like Liam, Aidan, etc. even though we like them.

One name we both sort of like is Ruby, but do Arlo, Hayes, and Ruby go together?

Please read on for my response and please leave your thoughtful suggestions in the comments.

I know what you mean … when you get in the groove with boy names, it’s tough to wrap your head around girl names, isn’t it?

Let’s start with the good news. If you absolutely had to choose your daughter’s name TODAY, then Ruby would be great. It’s fun with your last name. It works as a sister for Arlo and Hayes. And I think it meets all of your criteria: not too fussy, clearly feminine, nickname-proof. You might hear it a little more than you’d like – Ruby has ranked in the US Top 100 since 2013.

But my guess is that you’d be delighted with a daughter named Ruby.

Let’s try on some more names, though, because sometimes looking through a list is the best way to cement your favorite name – or fall in love with something new!

A SISTER FOR ARLO and HAYES

Originally a French nickname for Nicole (via Nicolette), Colette has long been an independent name. Tailored and feminine, it might be exactly what you’re looking for, especially since you loved the sound of Beckett.

Ivy packs a lot of sound into just three letters. Brief and complete, it’s the kind of name that feels traditional and fresh at the same time.

While we’re talking about Ivy, how about Lyric? Music-inspired word names can be a great choice, familiar to all but not as popular as, say, Willow or Rose.

This goddess name is upbeat and energetic. And while it repeats Arlo’s o-ending, it still sounds like a distinct and different choice.

At first glance, Maren seems like another surname name. Except it isn’t at all – it’s a tailored form of Mary.

Sage is a little bit of everything – a shade of green, a virtue name signalling wisdom, a nature name referring to the herb. You might also spell it Saige, but the dictionary spelling remains most popular.

One more word name: Wren, as in the bird. While most people will see it as a nature name, it’s also close to surname names in terms of style and sound.

Overall, I love the sound of Maren – especially with your surname! But if it’s too last-name-like, I wonder if you’d like Ivy? It’s slightly more popular than Ruby, but that V sound is so distinctive. In fact, I really like Maren Ivy as a full name!

Readers, what would you name a sister for Arlo and Hayes?