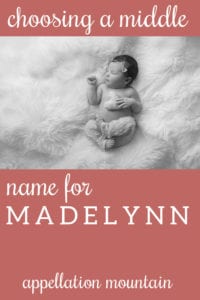 The process of naming my second daughter has become quite an emotional and stressful one, and I’m desperate for some advice.

My first daughter’s name is Clara Rose and I am absolutely in love with it. The name Clara was one we loved, and Rose is to honor my husband’s great-grandmother.

We named our second daughter Madelynn. I always wanted a daughter named Madelynn, but for some reason when we had our first baby, it just didn’t seem right. I guess it’s because the name was destined for the newest member of our family!

The problem is, we can’t commit to a middle name for her.

I always thought I would have a daughter named Madelynn Mae. Mae is my grandmother‘s name and her grandmother before that.

The problem is, Mae is also my middle name. And therein lies the issue.

I feel immense turmoil over giving this name to my second daughter, as my first daughter will not be named after me too. Something inside me is so worried that one day she’ll wonder why her sister was named after her mommy, but not her.

So, while Mae brings me great joy and I love the sound of it with Madelynn, my heart breaks a little every time I think about actually following through naming Madelynn this, for fear of hurting Clara.

I really like classic feminine names. I am also conscious of the fact that Madelynn is a longer name and thus need to be careful of something that would create too large a mouthful  –  especially comparatively to Clara Rose. Our name is two syllables and is like Herman.

I’d love your help – your thoughts on my concerns, the alternatives we’ve come up with so far, and other suggestions you may have!

Family names can be wonderful! They connect our children to earlier generations, including relatives they may never meet. And they provide built-in meaning for a name, a lifetime worth of stories to share with your child.

But they can also bring tensions. You might love every name equally. And it can be tough to feel like the names are truly fair, if one son is named after a beloved grandfather, and another is named after an uncle he’ll never meet.

So I completely feel how painful this is for you.

And yet … everything in me is screaming that Madelynn Mae is The Name for this daughter.

Stay with me for a minute:

I’m not convinced you’re naming your daughter after you. Not really. You’re named after your grandmother and her grandmother. This child would be part of that chain. That’s a really cool thing, but it’s not nearly the same as being a junior.

It’s remarkably fair that both Clara and Madelynn have middle names from opposite sides of the family. Clara’s middle name comes from her paternal great-grandmother; it seems fitting that Madelynn’s middle would come from a maternal great-grandmother. I’m guessing Rose doesn’t have the same emotional pull as Mae; but that’s a function of your personal memories, not the name’s status as a valued family heirloom.

If anything, dropping Mae takes something away from Madelynn. Unless, of course, there’s a name other than Mae from your family tree. Because Madelynn June is a lovely name, but then one sister has a family middle … and the other does not.

Rose and Mae are so beautifully balanced! Even without a family tie, they’re very comparable middle names. It’s not as if one daughter is Ava Grace and the other Elena Seraphina. They’re both gorgeous names, but you can see how someone might notice a mismatch.

And lastly, you truly cannot know how children will feel about their names across their lifetimes. It will almost certainly change as they grow. That’s true for your relationships with each daughter, and their relationship as sisters.

All you can do is choose a name you love – and you do clearly love the idea of Madelynn Mae – and build in a little balance.

Okay, let’s say I haven’t convinced you. What other middle names should you consider?

My instinct is to narrow the list to one-syllable names. (Not that there’s any shortage of those!) But if we focus on the more traditional choices, it’s a reasonably short list.

I suggest this for two reasons: first, it seems to suit your overall style. And second, as you say, Madelynn is already longer than Clara. So maybe it would be awkward to have Clara Rose and Madelynn Nicolette.

Between Grace and Joy, I’d favor Madelynn Joy. It’s an upbeat, affirming name to mark the end of your name search. And it’s a name that feels bright and optimistic at a challenging time.

On that note, I wonder if you’d consider Madelynn Hope? It’s another significant middle name, with ties to this moment in history.

Bree – I think Brielle is long, and just Elle might be too much L sound with -lynn. But Bree could be brisk, unexpected and perfect. Bea is another option in the same category, but maybe a little more traditional.

Faye – It’s not quite Mae, but not so wildly different.

Rae – Same thought as Faye, though if Faye feels a little fanciful, Rae has a more modern sensibility.

Sage – Another girls’ name from the garden, like Rose, but with an added meaning: wisdom.

Skye – A nature name with an optimistic vibe.

True – a virtue name that feels quite name-like.

Wren – A bird name, so it’s not quite like Rose, but it’s nature-themed.

Overall, my favorite remains Mae. But if that’s just impossible, then I think I’d opt for Madelynn Joy. It’s happy and spirited, and the initials MJ are great, too.

Readers, what would you suggest as Madelynn’s middle name?