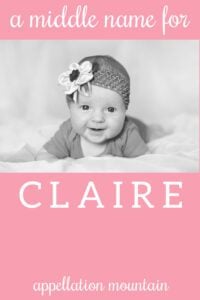 Our daughter is due in April. We agreed on her first name before we even knew she was a girl – Claire. I love that it is simple but elegant.

When it comes to middle names, though, we’re stuck. Our last name starts with an H, ends with an R, and is very common as a boys name and a last name.

Because her first/last name will be common, I want her middle name to be different. My husband has suggested Marie and Elizabeth, but he admits he’s mostly thinking of middle names of people he knows. Not to honor someone, just because those “sound” like middle names to him.

The name I keep coming back to is Persephone. Claire Persephone. Since she’s due in spring, I really like whole mythological aspect/seasons part of Persephone, too.

My husband isn’t sure about Persephone. So while I try to win him over, can you suggest some more ideas?

I’m swooning over Claire Persephone. The sound, the juxtaposition of a classic first with a completely unexpected middle, the whole tie-in to being a springtime baby. It’s just perfect.

If your husband is reading this, I really hope he agrees!

But let’s take a minute and talk about middle names in general, because it seems like you’re both approaching the question from a different direction.

RIDDLE OF THE MIDDLE

We spent lots of time talking about first names. But nearly everyone has a middle, too. (That wasn’t always the case. They didn’t begin to become official in the US until World War I.) So leaving the space blank doesn’t feel like an option. But we don’t always have lots of energy left to devote to middles after figuring out firsts.

So we default to a few names.

And there is a pool of names perfect as middles. They conform to our ideas about the right rhythm and style to fill up that spot. Grace and Rose are go-tos for this generation. Marie and yes, Elizabeth, have been favorites for even longer.

Okay, if your beloved grandmother’s name is Rose, then maybe that’s the perfect middle – even if it’s popular.

But a bolder – even slightly bolder – middle name can be a perfect choice.

It can distinguish your child from another who shares her name.

A friend has a great story about how she shared her common, but not that common name – first, last, and middle – with another classmate at her small liberal arts college. And how she almost didn’t meet her future husband, because when a mutual friend offered to introduce them, HE’D ALREADY MET the other Ruth Anne Henderson. (Not the actual name, but that’s the general vibe.)

Claire Elizabeth will be one of many. Claire Persephone is almost certainly the only one.

Maybe it’s a family name. A reference to a favorite place or song. In this case, Persephone is a nod to her season of birth – which is quite lovely, too.

You’ll often hear, “Oh, no one uses your middle name anyway.” Sort of true. But then again, so many middle names are on the predicable side.

When you have a great name story, it’s different. It becomes something you can share with friends. And a bolder, surprising choice sparks up a more classic first, too.

IF NOT PERSEPHONE, MAYBE …

At this point, I’m tempted to suggest Dulcinea and Romilly.

But the trick might be to thread the needle: what’s not quite as bold as Persephone, but less conventional than Elizabeth?

These names all rank in the current US Top 1000, have history galore, and should be broadly familiar to many. But they’re not typical middle names, either.

As regal as Margaret, as borrowed-from-the-map as Sydney.

Another El- name, but one heard rarely as a middle.

It sounds like a safe middle name, and I think it is – but it’s also not quite a traditional stand-by.

Maybe there’s a family surname that you can consider as a middle? If not, surname-style firsts like Hadley might be worth considering.

It’s not unusual to hear Joseph as a middle, or Jo for girls. But Josephine in full might be just different enough.

Or Madeline. Like several names on this list, it’s common as a first, less conventional in the middle.

This might be my favorite of the choices. It’s got such a sharp, tailored sound – I think it pairs beautifully with Claire.

A MIDDLE NAME FOR CLAIRE

I don’t think any of my suggestions top Persephone. But I do think they’re great alternatives to Elizabeth – just a little sparkier and less expected.

I’d suggest Claire Vivian or Claire Genevieve as an alternative.

Readers, over to you – what would you suggest as a middle name for Claire H—–r?