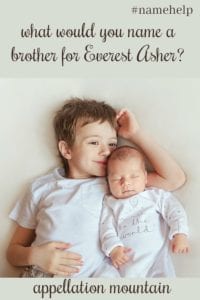 At times it felt like getting pregnant was like climbing that impossible mountain, and he’s a constant reminder that you keep trying for the things that are important to you. Asher is after my mom, because it has a similar meaning to her name. Because I went so big for my first son‘s name I’m struggling to find my second son‘s name.

Names with meanings are what I’m going for but I would love guidance or even other suggestions, too.

Congratulations on your new son! Everest Asher is a great name, with so much rich meaning. But I can imagine it might making naming a future child even more difficult!

Here’s what leaps out at me: while Everest is relatively rare as a given name, it doesn’t sound all that out-there. In fact, it sounds an awful lot like another fast-rising surname name, Everett.

In fact, I can imagine brothers named Hayes and Everett, or Isaac and Everett. Substitute Everest, and those names work every bit as well.

Bodhi, with so much spiritual significance, leaps out at me as an equally logical match for Everest.

And yet, those names represent opposite ends of the spectrum. There’s meaningful, but more surprising Bodhi at one end, and Hayes and Isaac as more mainstream choices – but with the potential to be just as special for your family.

It feels like we need more names that fall in the middle: distinctive, meaning-rich, but not too out there, right?

I wonder if any of these might work as a brother for Everest Archer:

Arrow – Like Everest, Arrow falls outside of the current US Top 1000, but we’re hearing it more and more. It’s a weapon, I suppose. But it’s also a virtue. It symbolizes achievement, purpose, and dedication. That’s a worthy brother name for Everest.

Blaze, Blaise – Hayes does sound like haze, which lends the name some additional appeal. But if it’s fire you’re thinking of, Blaze is an even more dramatic choice. Blaze is all word name, but Blaise? That’s almost a buttoned-down traditional, the name of a fourth century saint and a seventeenth century philosopher-mathematician. Either spelling seems like a fit for your family.

Bridger – Back in the day, if your last name was Bridger you probably lived near a bridge, or worked as a bridge keeper. Or maybe your grandfather or great-great-grandfather did. These days, bridges read differently. Building them is a good thing, a way to cross divides. That makes this name feel far more meaningful, but it’s still rugged. Jim Bridger was a famous frontiersman in the late 1800s, and a number of places in the American West still bear his name.

Fox – This is a straight-up animal name, but the fox is known for its cunning and smarts. They’re popular from folklore to modern story-telling, from Aesop’s Fables to The Fox and the Hound.

Justice/Justus – I wonder if a word name like Justice might appeal? Justus is pronounced the same, and carries the same meaning, but it’s got centuries of use behind it. There was a seventh-century Archbishop of Canterbury named Justus, so this name? It’s been around.

Lucian – You mentioned liking Lucas because it refers to light, from the Latin lux. I wonder if Lucian – which comes from lux – might appeal even more, because it’s much less popular? They’re both great names, though.

Wilder – Wilder feels like a tremendously versatile name. It’s outdoorsy, but that outdoors could be hiking through the backwoods. Or on a yacht. While Wilder is gaining in use, it’s still relatively uncommon, and could make a great brother for Everest.

Overall, my favorites are Arrow and Bridger. They hit the same stands-out, fits-in note as Everest, and they’re substantial and meaningful enough to sound like his brother.

Regardless of the name you choose, I’d be very inclined to consider Isaac as a middle. It does match up nicely with Asher. Arrow Isaac might be my favorite!

Over to you readers! What would you suggest for Everest Asher’s new brother?