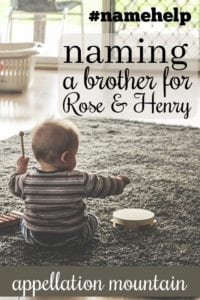 Update: He’s here! Welcome to the world, Leo Arthur. Congrats to the family.

Just found out we are having our second boy, our third child. We have a Rose and a Henry. A girl would have been Lucy or Alice. Easy to choose-classic and unexpected I feel. But we are having the worst time coming up with a boy’s name!

We want something non-Biblical, which cuts out so many names, particularly Ezra, Jonah, Asa, and Gideon, all of which I love.

I want a short name because Rose and Henry are short.

I want a name that doesn’t stand out as totally different (like Yuri or Idris), but don’t want something that feels super expected or boring (like Jack or George). Somewhere in the middle.

Last name is McC- so no hard C sound or Mc- names.

There feels like there is no name out there that feels like a natural brother to Henry (which was my favorite boy name ever). Oh and we are due soon – in early December!

Congratulations on your third! At first, I thought this would be such an easy question to answer. And then I realized … non-Biblical, not-too weird, not-too popular, short? That rules out nearly every name that came to mind!

Let’s start with a question: how serious are you about the non-Biblical part? A great many classic boys’ names do have roots in the Bible. But there’s a world of difference between a name like Andrew and something like Jonah. Both could be brothers for Henry, but one makes me think about the Biblical story. The other? I know the name appears in the New Testament, but I don’t put it in the same category as, say, Ezra and Gideon.

For now, though, let’s find names that meet all of your criteria.

Alex – The average Alex is really Alexander. And a handful of Alexanders answer to some other nickname. But there’s no reason you couldn’t use just Alex. It ranks #151 as an independent given name. There’s Alec, too, which might feel less like a shortened form of a longer name. Or it might just cause confusion. Alex’s roots are ancient and Greek.

Clark – Clark brings to mind Superman, but it’s actually a surname with Old English roots, originally an occupational name for a scribe – or clerk. It sounds classic and complete, but not quite as common as Jack.

Dean – Like Clark, Dean has occupational origins. Or it might come from a word meaning valley. Either way, it’s not quite as traditional as Henry, but might make a great brother name.

Hugh, Hugo – From an old Germanic element meaning spirit or heart, Hugh has plenty of history. But it’s short and complete. I like Hugo even better; it’s the Latinized form of the name.

Leo – If the o-ending of Hugo appeals, but it’s not quite the name for you, how about Leo? From the Latin word for lion, it’s fierce in meaning, but gentle in style.

Patrick – I know, I know – the nickname Pat belongs to another generation. But Patrick, both syllables, feels handsome and traditional.

Theo – Theo shares the same challenge as Alex; most of the time, it’s short for a longer name. And you could use Theodore! But Theo stands alone, too, currently ranked #289 in the US.

William – Okay, William ought to be perfect, right? I mean, how great do William and Henry sound together? So great, of course, that they’ve already been used – think Will & Kate and Harry & Meghan. I’m not convinced this is a dealbreaker for everyone. After all, you never call your Henry Harry, right? And Rose isn’t straight off the royal family tree. Still, I wonder if it might feel a little too similar?

Overall, I’m tempted to push for Patrick, but is that hard C- sound in your surname too much with Patrick? Or exactly enough?

Instead, I’m going to suggest Hugh if you don’t care for -o ending names, and Hugo or Leo if you do.

But I can’t wait to hear what readers will suggest, so let’s open it up to the community: What would you name a brother for Rose and Henry?