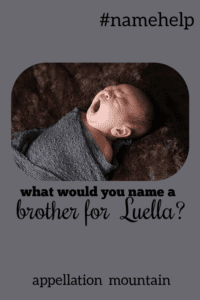 Wondering if you might help us with naming our boy, due in November.

His sister is named Luella, a name you featured on the site, which we loved for its unusual but feminine sound. We actually first stumbled upon it when reading up on the history of 20th century blues singers.

Now, we are looking for an equally charming name for our son. My husband’s family has a long tradition of naming boys Charles, but we are planning to break that tradition. At present, names on our list include Marlon, Haddon (a family name) and … well, not much else! We are open to suggestions.

I generally like names with some historical weight behind them – I’m not so much into more modern sounding names like Brandon, or Bryce, for example), but my husband is not into names that sound TOO formal, like Alden, or Phineas, (both of which would be on my list).

Could you suggest some names that like Luella are unusual without being too “out there”?

Here’s the tricky part about unusual-but-not-too-out-there: it’s different for boys.

I wish that wasn’t true. And I’m happy to report that it’s changing. But the fact remains that over the centuries, we’ve used a broader range of names for girls. That means the pool of possibilities for boys is comparatively shallow. This means that we tend to favor the fits-in over the stands-out when it comes to naming sons … at least a little bit.

The other part of the equation that gives me pause is the idea of a name being “too formal.” I get that vibe from Phineas – the spelling is slightly involved, and it’s tempting to shorten it to the more casual Finn. But Alden feels like an obvious match for Marlon and Haddon, so I’d put them on the exact same list. (It sounds like you have!)

Still, sometimes we just plain can’t describe the reasons one name feels not-quite-right. I suspect some of my suggestions fall a little close to Phineas, but hopefully they’re on the right side of the line.

So what’s the masculine equivalent of Luella?

Caspian – A relative newcomer to the US Top 1000, Caspian blends a sort of literary, romantic vibe with a long history of Cas- names for boys. (Caspar, Casimir, Casey, etc.) While three syllables might strike some as extravagant, like Luella, it really doesn’t need to be shortened.

Cedric – Have I gone too far? It’s unusual, but it’s ranked in the Top 1000 every year since 1940 – and many years before that. The name comes straight out of literature. (Think Sir Walter Scott’s 1819 novel Ivanhoe.) The fact that he’s a significant character in the Harry Potter universe makes the name feel more familiar to a younger generation, though so far, it’s not led to an increase in the name’s use. But that might suit your family just fine!

Duncan – I always expect Duncan to be a little more popular than it is. After all, it’s vaguely literary. (He’s the late king in MacBeth.) And it’s got a certain indie vibe, too. It’s as brief as Alden and Marlon, a nickname-proof choice that feels as casual and cool as Luella.

Foster – Foster makes the list because it has the same nickname-proof qualities as Duncan, and I think it has the same not-quite-discovered vibe, too. I’ve always liked the potential meaning: to foster is to encourage. But, of course, it’s broadly associated with foster care, which might give some pause. But it’s close enough to Top 100 favorites like Carter and Hunter to blend in just enough.

McCoy – Doesn’t Luella feel just the tiniest bit Southern? Not in the Scarlett-Gracie Mae way, but in a more subtle fashion? I’d say the same for McCoy. There’s also the Star Trek character, and the phrase “the real McCoy,” but I’m not sure either distract from the name’s appeal.

Shepherd – Or should it be Shepard? Either way, I think there’s something masculine and meaningful, a modern name with deep roots.

Thatcher – Thatcher makes the list for the same reasons as Foster. It’s relatively uncommon, but easy to spell and pronounce. And it feels like an appropriate name for a son, even if he’ll rarely share it with another.

Wallace – Up until last year, Wallace hadn’t appeared in the US Top 1000 for over two decades. It’s an impeccable classic. Wally isn’t the most appealing short forms, but Wallace in full is quite handsome.

If all of these feel a little too different, I’m tempted to suggest Everett, Knox, and Hayes, all names that appear in the current US Top 350. (Everett is actually in the Top 100.)

From your list, I think Haddon is practically perfect. It’s different, but family name status counts for an awful lot.

If Haddon is a non-starter, my favorites is Duncan. I think it hits the familiar-not-common note exactly. There’s history there – two real kings of Scotland, aside from Shakespeare’s ruler. And it has the same casual cool of Luella.

While it’s much more popular, I also love Hayes with Luella.

Readers, over to you! What would you name a brother for Luella?

Image by Thành Lê from Pixabay 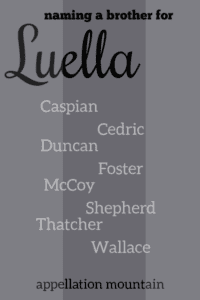