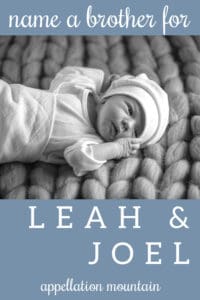 We are pregnant with our third and recently found out we are having another boy.

Our first two are Leah and Joel. If you had any boy name suggestions for us, we would so appreciate your input!

We aren’t stuck on 4 letters, but just tend to gravitate to shorter, traditional or familiar names.

One of our top names at the moment is Sean (possibly spelled Shawn).

Thank you for all of the help!

Here’s what leaps out at me: yes, your son’s name should be brief. But it should also be timeless in a very specific way.

We’re not looking for an evergreen classic, like William.

Instead, we’re looking for a contemporary traditional. A name that isn’t clearly specifically tied to a decade, but does feel like a name that’s from more recent generations. It could belong to the dad or the kid, but probably not the grandpa. (Though maybe!)

It also strikes me that Leah and Joel are both Old Testament names. Lots of great names are! But Sean/Shawn is not, and that strikes me as potentially smart. If there are more children in your future, it’s less of a pattern if you break it now. But then again, Leah and Joel have been so broadly popular for so long that I’m not sure it’s obvious, like it might be if you named your kids Hezekiah and Keturah.

Okay, on to the names!

A BROTHER FOR LEAH AND JOEL

It’s tempting to leave in the 1960s, a leather jacket-wearing Rebel Without a Cause or maybe one half of surf rock duo Jan and Dean. But Dean keeps coming back, generation after generation. 90s kids might think of him as Rory’s first love on The Gilmore Girls. There have also been Deans in Supernatural and the Harry Potter series, to name just two. It’s a modern traditional, which is just what you’re after.

Plenty of Drews are actually Andrew, but the name stands alone, too. (Former NFL quarterback Drew Brees is just plain Drew.) I think it works best for your family as an independent name. I like the way Leah, Joel, and Drew all have strong vowel sounds, but don’t sound too similar.

Sean is the Irish form of John, and Evan is the Welsh. The ‘v’ keeps it very current, and even though it’s still four letters, it’s two syllables, which makes the name feel a little bit longer.

A television cowboy popularized this nature name in the 1960s. But it never quite caught on. After all, Heath was ahead of its time. This feels like a brother for River and Ridge and the outdoorsy, nature-inspired choices we love now. But it’s got enough history of use to match nicely with Joel and Leah, too.

Is Jesse too close to Joel? Maybe, but you already have a Leah, so I think it’s a non-issue. I love the simplicity of this name, the meaning – gift – and the fact that it’s another subtle Old Testament pick.

Luke is one of those names that feels very traditional, but actually is more popular today than in, say, the late 1800s or early 1900s. As with Jesse, there’s a repeating initial with an older sibling, but it still works.

Possibly my favorite example of a contemporary traditional. Ryan feels rooted and familiar, but it’s actually a relative newcomer to the boys’ Top 100 – at least in the US.

A name with roots in Egyptian mythology and the Old Testament, Seth has history to spare. But it feels more like a recent favorite, from the same era that popularized Heath.

Overall, I’m not sure any of these top Sean. I’ll admit I prefer the Sean spelling – partially because it sticks with the four-letter pattern, but mostly because it feels like the more traditional spelling.

If not Sean, Dean gets my vote. Funny how they’re spelled so similarly, but pronounced differently, isn’t it?

Readers over to you – what would you name a brother for Leah and Joel?