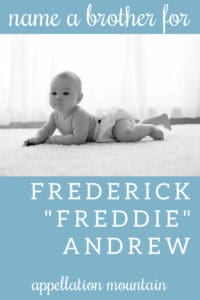 We have a two year old son named Frederick “Freddie” Andrew and he’s going to be a big brother in a few weeks!

It’s another boy, and we’ve looked at every boy’s name under the sun and still can’t agree.

Frederick is a name we both loved. It’s classic, but we didn’t know a single Frederick. Freddie is adorable, but there’s the actor Freddie Highmore which made us think it would be good for an adult. And Freddie Mercury, which we thought made the name a little cooler.

Andrew is for my husband, who is actually just Drew, but we liked Frederick Andrew better than Frederick Drew.

For this boy, the names we haven’t ruled out are:

ARCHIE – Except not Archibald. It’s just too much name.

JOSEPH – A family name on both sides, but seems kind of boring compared to Frederick/Freddie. And while I like Joey okay, I’m not sold on Joe. It just seems like not enough name, and I don’t like the whole average Joe/ordinary Joe lines that pop into my head. And I don’t like it with our last name, but it could be a middle name.

MONTY – I feel like we should like Montgomery more than we do. And Montague seems like too much, even for us! Someone suggested Monterrey, but Frederick and Monterrey don’t really feel right to me.

SEBASTIAN – I love this name with Frederick! But I don’t really like any of the nickname options. Also, our neighbors across the street have a Sebastian, and he and Freddie play all the time, so I feel like that might be weird.

WALLACE – Except I don’t like Wally. Our last name ends with an R so Walter doesn’t seem right. (Which is too bad, because Walt is great.) My husband shot down Walton, because of the old TV show.

Our last name is two syllables, begins with J, ends with R, and so J names aren’t great, and names ending with R are pretty much out.

It sounds like the perfect name would be a rock solid classic with a great nickname that you’d use pretty much 100% of the time, right?

I’m tempted to suggest Charles called Charlie, but I’m guessing that a) you’ve probably already thought of that; and b) you’re trying to find something that won’t repeat, so that rules out Charles-called-Charlie, Henry-called-Hank, and probably Theodore-called-Theo, too, right?

So let’s think about traditional names that have long been overlooked in the US – just like Frederick!

Plenty of names shorten to Bertie, from dusty antiques like Cuthbert to the more familiar Albert. It’s a little royal family, maybe … but then, lots of classic names are, and it isn’t as if you’ve named William and Charles.

My first thought was Edwin, with the nickname Ned. And then it hit me: Eddie. And his brother Freddie. So that’s a non-starter and a potential problem, too. But Freddie and Ned are all kinds of perfect together, so it’s still on this list.

We tend to think of George as nickname-proof, but Georgie and Georgie are logical choices. Harry Potter fans are already shouting “but Fred and George Weasley!” Which is fair. Except I’m positive that they’re not the first set of brothers with those names, and will not be the last. (Also, it’s not a bad association in any way, though it’s a bit sad at the end.) British readers – and fans of soccer club Newcastle United – might also shout “But what about Geordies?” It’s the name for the accent, dialect, and more broadly, the culture, from the area around Newcastle upon Tyne. In the US, though, we’re used to Jordy thanks to a generation of Jordans, so I think it works.

I’ve also come across a Howard called “Hoby,” which is my all-time favorite nickname. But Howie is adorable, too. Howard feels cuddly and vintage, an overlooked name with roots among the English nobility. (Catherine Howard was the fifth wife of Henry VIII.) It was also a Top 100 mainstay in the US right into the 1950s.

I’m not sure if Leo is too popular to work for your family. I do like Freddie and Leo together, and Frederick and Leland are quite the handsome pair, too. Like Howard, Leland started out as a surname, but it’s long since transitioned to acceptable first name status. I like the gentlemanly vibe of Leland combine with the approachable Leo.

The Normans brought this medieval favorite to England, and it’s appeared in the US Top 1000 every year since the data was first reported in 1880. In fact, Raymond ranked in the US Top 100 well into the 1990s. Ray has the same brief, boyish energy as Jack or Gus, but Raymond is more of a throwback.

Okay, Robert doesn’t feel unusual. It ranked #1 in the US in the 1920s and 30s, and remained a Top Ten choice into the 1980s … and it’s still a Top 100 name today. Except I think this is one of those names that is familiar on adults, but relatively rare on children. Robby is darling; Robert is dignified. Would your Robert someday join a whole bunch of grown-up Roberts? Yes! I know a bunch. But I only know a single under-12 Robert, and if that’s what matters, this name deserves a closer look.

When Woody comes up, plenty of parents dismiss it because there’s some teasing potential. Which is true. Except if you’re under the age of 30, Woody is probably all Toy Story to you, with maybe a dash of Woody Harrelson for Hunger Games/Zombieland fans.

Overall, I keep coming back to Robert, because Freddie and Robby/Robbie do seem to hit the right mark. But I want it to be Edwin called Ned … it’s just that the potential for Freddie and Eddie feels a little too straight-out-of-an-animated-series.

I do think that Joseph is the obvious middle name choice, though – and, depending on the first, might even give you additional nickname options: AJ, EJ, RJ, maybe?

Readers, over to you! What underused traditional names would you suggest for Freddie’s brother?