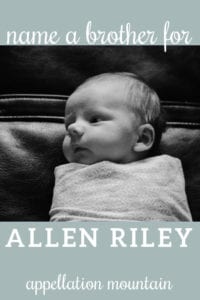 Help! We have a son named Allen Riley, and we’re expecting another son in September.

I adore my sweet little boy, but I’m not crazy about the name Allen, even two years later. It is The Most Important Name in my husband’s family, and it meant everything to him and to his mom to use it. But Allen still sounds so … I don’t know? Middle-aged?! Which my son will be someday, of course. But I had a really hard time calling any baby Allen, even my own!

My husband knows I feel this way, and because he’s awesome, he suggested that I choose the name for this baby, and he’d be fine with whatever I liked for the first name. (I chose Allen’s middle name.)

That sounds great, but I feel like it’s really hard, too!

So far I like Wyatt, Hayes, Holden, and Miles, or maybe Milo. I do like Arlo, but I’m not sure I want two A names. We’d like to have one more baby after this, and I don’t want to be stuck with all A names. I like Reed/Reid (not sure about spelling), but our last name is like David-plus-son, and the d sounds run together.

I’m worried that their names won’t sound right together, but I can’t think of what would sound like Allen’s brother. Craig, Randy, Barry?! I mean … no.

And there really aren’t any more family names, from either of our families, that we would really consider using.

Let’s begin with the most important part: you did a really good thing when you welcomed your first child. You unselfishly let your husband choose The One Name that would mean more to him than anything. And while I know what you mean about Allen being a very grown-up name for a baby, I happen to know a school-aged Allen. (I think it’s a family name, too.) And it’s all kinds of adorable, once you get over the surprise.

And I think it is so good and fair and reasonable of your husband to recognize that it’s your turn to drive.

None of this, of course, helps you actually name your son.

Maybe this will: repetition makes anything sound like a set.

No, really. Think about your married friends. Their names almost certainly don’t match, at least not all of the time. Except it’s almost hard to recognize that, because I’m so used to saying “Oh, right, I’ll call Keri and Henry.” Or “Maybe we should see if Jeff + Mary are free.”

For every Josh and Lindsay, there’s a Brad and Martha.

The same is true for your boys: Allen and Wyatt or Allen and Milo or Allen and … erm … Barry, whatever you choose, will quickly sound right together.

But I do have a thought.

Allen reads a little like a surname name. It started out as a given name, but particularly this spelling – as opposed to Alan/Allan – feels like a last name in the first spot.

So I wonder if you’d be more comfortable with another name that shares the same history?

Wyatt, Hayes, Holden, and Miles all fit. And I think they sound very much like a match for Allen. And the fact that they’re similar in length helps, too. Allen’s brother could be Balthazar – but I think that would be more noticeably different.

Actually, Holden might be too similar. I also wonder about the repeating D sounds with your surname?

So that leaves Wyatt, Hayes, and Miles. Let’s add a few more.

A surname name that feels outdoorsy, but also at home in a blue blazer.

I like the way Allen and Everett both start with vowel sounds.

I really like Parker with your surname, and I think it works well as Allen’s brother.

Walton is so rare, it surprises me! It hasn’t appeared in the US Top 1000 since the 1950s. But I almost feel like that makes it an even better match for Allen.

Like Brooks, this name straddles the surname/nature name divide.

We tend to hear it as a first name, but Xavier started out in the last spot.

From your list, my favorite is Hayes. Allen and Hayes are different in sound, and, in some ways, belong to different eras. But I think they’re consistent in terms of style, and I really like the slightly varied syllable count.

But I’m not sure I love Hayes with your surname. And Miles with David-plus-son sounds awfully close to the jazz musician.

So that brings us to my list. My favorite is probably Wells. Besides the surname qualities, I like the way that Wells nods to nature names. And maybe virtue names, too – after all, we talk about “wellness” and “well being” and “wellsprings.” All positive, auspicious images for a child’s name.

Readers, over to you! What would you name a brother for Allen Riley?